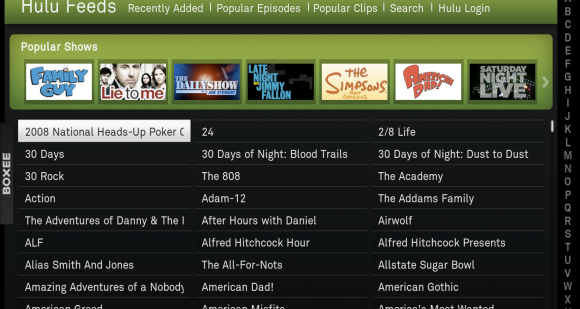 When Boxee was forced to pull Hulu support a few weeks ago, users were outraged. And rightfully so. It’s not like Boxee, a software media center startup, was blocking the advertisements Hulu was showing, it was really just another way to view the content, almost like another browser. But the powers that be behind Hulu — that is, the big media companies that product the content — forced Hulu to shutdown the pipeline of content to Boxee. Today, that content is coming back … kind of.

A new “bleeding-edge” release of Boxee (which is its way of saying that it may not be stable) features an RSS reader optimized for video. This means that any Hulu content which has a public RSS feed can now be pulled in and viewed through that. Boxee warns that it’s not as nice as the solution it previously had with Hulu, but it gets the job done in some cases.

I had heard from a source last week that Boxee was meeting with Hulu as well as representatives of Fox and NBC (which are backers of Hulu) to try and resolve matters and bring the service fully back. Those talks proved unsuccessful for now, Boxee has confirmed.

“We met with Hulu and their content providers, but they weren’t ready to work with us yet.  When they are, we look forward to bringing a more robust version of the Hulu application back to Boxee with their help. To meet the needs of our users. In the meantime, we’ve included an RSS reader in this version of boxee that is optimized for video.  As with any other RSS reader like Firefox, NetNewWire, or Google, this feature allows users to access publicly available RSS feeds from Hulu, Google Video. YouTube, and many others,” a Boxee representative tells me. 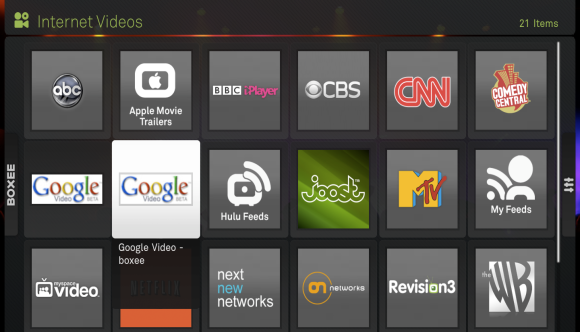 In its post on the matter, Boxee seems to go out of its way to say nice things about the big media companies who, let’s face it, are really the ones calling the shots here. In the usual lowercase posting style that Boxee specializes in, it writes:

while we don’t come from an entertainment or cable background, we are learning quickly. it is a complex business. the fact that it’s becoming easy to consume Internet video on a TV brings into question many of the industry’s business models that developed before the web. the people in the industry “get it”. they are users. they read the blogs. they talk with users. they are trying to adjust to a new reality, but they need time.

Which is to say, they need time to make sure that Boxee is not a threat to the online money pipeline they see with Hulu.

As a bonus, Boxee has thrown another two other features into this new alpha release as well: A new service called “App Box” and auto-update functionality.

App Box is the interesting one, as it’s Boxee’s take on the app store craze that has swept the mobile world. Basically, this store will allow for new apps and plugins to be listed and easily installed within Boxee, including those from third-party developers. Yes, Boxee it’s becoming a true platform.

And it will be continue to be an open platform. “There is also native support for third-party repositories, so you don’t have to rely on Boxee as a gatekeeper for what goes into the official Boxee app store,” the company notes.

Meanwhile, the auto-update feature will finally let users know when a new version of the software is available, within the software. Rather than checking the site or Boxee’s Twitter feed, users will now be prompted to download a new version when it’s ready.

Speaking of new versions, as I noted, this latest release may be fairly unstable, but Boxee wanted to get it out there. It plans to have a more stable release ready in time for its New York City meetup on March 24. At that event, it also plans to share information about the beta release of the product.

Boxee raised a $4 million first round of funding from Union Square Ventures and Spark Capital in November. 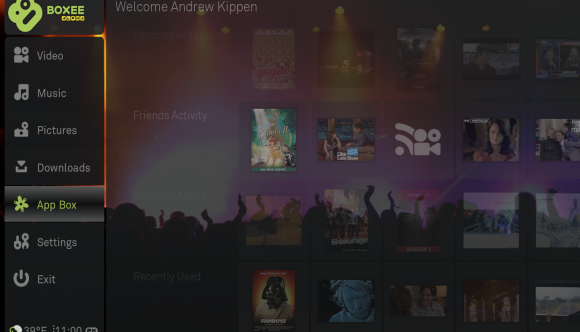