CANNES, France — Now that Snapchat has moved beyond its ephemeral photo-sharing into being a news and storytelling platform, it’s time for the startup with a $19 billion valuation to make a little money.

To sell the idea that Venice, California-based Snapchat is the best way to reach those elusive millennials, the company’s cofounder and CEO Evan Spiegel flew all the way to France to speak at one of the world’s biggest advertising and marketing events: Cannes Lions.

As the intersection between technology and marketing becomes more crowded, Cannes Lions has seen a growing presence from U.S. tech firms who depend on advertising. Spiegel, visibly jet-lagged after arriving from Los Angeles yesterday, had a high-profile, hour-long slot to address 3,000 people in a large, sweaty auditorium.

Clearly, the world of marketing and advertising wanted to hear what the 25-year-old entrepreneur had to say. The company claims that 60 percent of smartphone users ages 13 to 34 use Snapchat, which is the kind of stat that activates just about every advertiser’s saliva glands.

Spiegel was interviewed on stage by Joanna Coles, editor of Cosmopolitan magazine, which happens to be a partner on Snapchat’s Discover platform. (I recently called Discover “the single best intersection of mobile + video + news that I’ve seen since the launch of the first iPhone seven years ago.”)

Over the course of the interview, Spiegel explained a number of ways he believes Snapchat is different (and, of course, better) than other tech companies begging for ad dollars. It starts with a slower, deliberate approach to releasing new stuff.

“I would say we’d probably release about one percent of the products we’re working on,” Spiegel said. “We build stuff all the time that’s never released. It’s just terrible.”

But more than that, when it comes to building an ad platform, Spiegel tried to argue that Snapchat is trying to take a radically different approach than its competitors.

Rather than leaning on gobs of data to personalize ad experiences and finely slice targeting, Spiegel insisted that Snapchat is not amassing large data sets on individual users’ personal information. Spiegel said he has an intense dislike of the kind of targeted ads that are becoming more prevalent.

“I got an ad this morning for something I was thinking about buying yesterday,” he said. “And it’s really annoying.”

“We care about not being creepy. That’s something that’s really important to us.”

Probably not coincidentally, Snapchat introduced its 3V Advertising product before Spiegel’s appearance. The vertical video ads play between curated content on its Stories. These Stories are aggregated photos and videos submitted by users of an event that are assembled by Snapchat editors.

This highlights a few other ways Snapchat is trying to be different.

Rather than play the ads at the beginning, they appear in the middle of a stream. Spiegel said that feels more natural to him, and that the company has found people are more likely to watch the whole video and engage with it.

In addition, Snapchat is sticking with the vertical video format, which runs counter to the typical horizontal videos found on YouTube and Facebook (livestreaming apps like Periscope and Meerkat are also pushing this format). Spiegel said that the company’s research showed that when served a horizontal video, most people did not turn their smartphone to make it appear full-screen.

By comparison, the vertical video is full-screen to start, and thus a richer experience, he said. 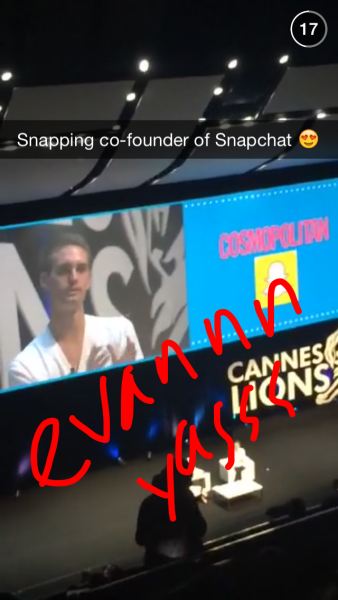 Above: A snap of CEO Evan Siegel from a “Story” that’s being curated on Snapchat for Cannes Lions.

In addition, the Stories are built through curation. Spiegel said that while Snapchat certainly uses some data, like geolocation, it prefers to use human editors rather than algorithms to create the Stories. He believes firmly that events should be told with some kind of narrative arc, and editors are better for creating the experience.

Spiegel said this has been true not just for Stories, but for the Discover platform the company launched earlier this year with a dozen or so media partners. He said the mobile video news service works best when the partners clearly have strong editors putting together their daily packages of content.

“One of the things we said that was really different was, we said that editors are really important,” he said. “We’ve seen channels with really strong editors outperform other channels.”

The past year has seen Snapchat grow from 45 employees to 450. For events as disparate as the Charleston shootings and NBA games (where Spiegel said typically 20 percent of the fans in attendance are using Snapchat), the company has shown its growing might as a media company.

Spiegel wouldn’t say much about what’s next, except to hint that the coming year the company would refocus more on its core communications service (sending one snap to another person) and tying that more closely to its media platforms.

"Why have so much copy when all you need is a cool logo?" (via @Brandietan) @Snapchat #CannesLions pic.twitter.com/NpscuEyOEq