Chinese web companies, like those in Germany and other countries, sometimes get accused of ripping off successful U.S. ones, sometimes rightly so. But there are plenty of inspiring examples that prove the China-copycat stereotype wrong.

Local review site Dianping, for example, which may remind Americans of local review site Yelp, is a lot more than “Yelp for China” — and not only because it started a year and a half before Yelp, in early 2003.

The Shanghai company’s site (available in Chinese only) is the largest local review service in the country, with a strong focus on restaurants. It has nailed the market in a way that a foreign company probably wouldn’t have understood. Restaurants are an especially big deal in China, as friends and family habitually go out to eat together. 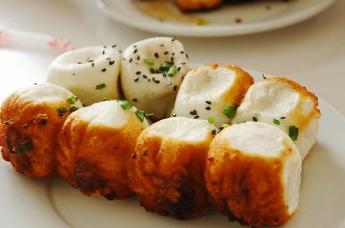 One of Diangping’s most popular features, for example, is a way for users to vote and discuss their favorite dish at a restaurant. This is specifically important in China, because there are literally thousands of dishes; some restaurant menus are books, with more than 100 pages of options. A basic review of a restaurant is hardly good enough for a first-time diner because one wants to know specifically what to order besides, say, the fried buns. Check this article out for an English-language summary of some of Diangping users’ favorite Shanghai dishes.

The company offers a range of related products that piggyback on its users’ love of dining out. Through participating on the site, users can earn VIP cards that get them discounts at some restaurants. It also offers a range of gifts that users can earn, including an annual book it prints, which top users can get for free. The company also publishes a free report on trends in dining, based on its user data that shows popular cuisines, dishes and areas of a city — a way for restaurants themselves to understand what’s happening in the industry.

Dianping’s expansion over the last years also reflects the booming economic development in the country, specifically hot real estate markets. Focusing on urban, white-collar types with money to spend, it now has around five million unique visitors per month and is growing, it tells me. Most of its users are in major and fast-growing cities like Beijing, Shanghai and Guanzhou. While Chinese internet users skew younger, with half under the age of 24, according to the China Internet Network Information Center, Dianping’s user base is older, with most between ages 20 and 35. 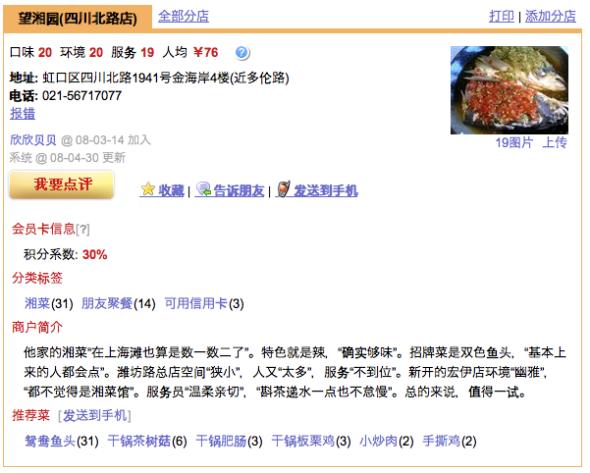 The company is competing, to some degree against restaurant-focused reservation site Fantong, as well as a range of other, smaller companies that deal in local information. But really, the closest comparison is Yelp.

Like Yelp, the company gets a significant amount of users through search results. It doesn’t have to rely on objective search engine spidering, though. The dominant search engine in the country, Baidu, openly sells preferential placement to advertisers within organic search results, which is a way for Dianping to appear high in general searches like “sichuan cuisine, beijing” (in Chinese, of course).

Dianping makes money from selling sponsored results to restaurants and other vendors, also similar to Yelp. But as is common with Chinese web companies, it doesn’t rely on automated ad sales. It has a large sales force (which is inexpensive, due to low labor costs), and has five offices around China actively selling ads. A local restaurant can target ads on the site based on location, cuisine and dishes.

The company would be profitable except for its aggressive marketing efforts, and has taken on a couple rounds of funding from top Silicon Valley firm Sequoia Capital. It isn’t interested in selling, unlike many U.S. web companies — for many reasons, this is also typical of successful Chinese web companies. If it meets its growth and revenue goals in the next few years, it will do an initial public offering.

Beyond its marquee American investor, the company is a good example of the blending of Chinese and American entrepreneurship. Its founder and chief executive, Tao Zhang, and chief financial officer Shuhong Ye, both attended U.S. business schools and spent time working in Silicon Valley.

Zhang himself is one of the earlier of this era’s web entrepreneurs. Coming back to Shanghai in 2003, he wanted to know what restaurants to go to — and thought back, at that point, to the success of crowd-sourcing with the growth of Wikipedia and other seminal web sites.

[Photo of the delicious-looking buns via Shanghaiist.]