A couple of years ago, Cisco started forming its own startups inside the company aimed at moving the big networking giant into adjacent markets. Now it’s launching a couple of new emerging technology products that were born from that effort.

Today, Cisco is announcing Enterprise TV, a YouTube-like video posting and viewing service aimed at enterprises. It is also announcing a security camera that extends an existing line of “physical security” and video surveillance products.

Marthin De Beer, senior vice president for emerging technologies, said in an interview that the video product in a recognition of how web video is making the transition from the consumer market to the enterprise. In January, consumers watched 250 billion minutes of video.

The Enterprise TV platform will make it easier for companies to do everything related to video: creating it, capturing it, and playing it. Employees can capture video of meetings or training programs and upload it immediately to their enterprise networks, where employees can watch it on demand.

“Think of it as YouTube for business,” De Beer said. 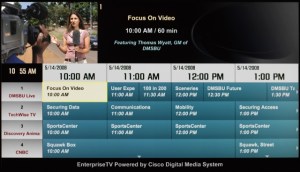 But the video can be high quality, up to 1080p resolution, and Cisco’s platform can automatically transcode the video to the right format so it can be played back without any hassles. Cisco’s video cameras will actually come with wearable encoders. You plug the cameras into the encoders and they can reformat the video as needed and stream it nearly live to a corporate intranet. Cisco has created its own software to capture, post, host and stream. Cisco is also announcing today a new version of its digital media player, dubbed the Cisco Digital Media Player 4400G. Both Enterprise TV and the player are part of Cisco’s Digital Media System product line, which has more than 600 customers around the world today.

Enterprises have been slower than consumers to pick up on video technologies such as YouTube, partly out of concern for bandwidth costs, a lack of compelling applications, and because the picture quality is often poor. For enterprises, the purchasing process is slower and so Cisco believes that integrating Enterprise TV with a host of enterprise applications will help its acceptance.

Cisco has also created a new generation of security cameras that are integrated with its ISR routers for banks and other highly secure places. With the integration, the cameras can stream video through the routers so that the video can be stored and watched anywhere. 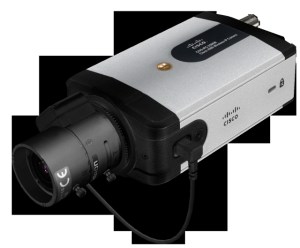 Typically, video cameras store data to tapes or hard disks near the actual location where the camera is. But thieves have learned to steal tapes or disks when they break into locations. If the video is streamed to another location and copies on multiple storage devices, the thieves can’t intercept the video. In addition, the video can now be embedded with alerts and have a Tivo-like capability so that it’s easier to scroll through hours to find the right moment needed. The cameras are relatively cheap, ranging from $150 to $800.

De Beer said that the emerging technology businesses cover four areas including telepresence (high-end video conferencing), digital media, and physical security/video surveillance. The fourth area will be unveiled soon but is still secret. All of those have the potential of being billion-dollar businesses some day, he said. Cisco has a ton of competitors, such as Sony and Panasonic, in new markets such as video surveillance. More focused competitors include Axis and Pelco. But De Beer said that the company’s broad solutions should help it be more competitive. 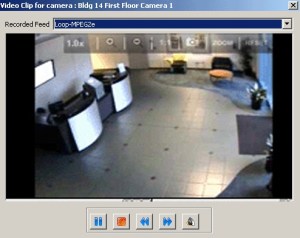