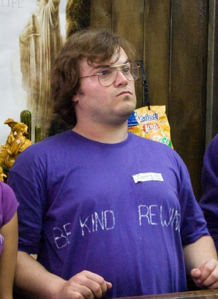 To work at a video store, it’s pretty much a requirement that you not only love movies but also know a lot about them — or at least think you do. We’ve all been to a local video store where the clerk dishes out recommendations. Sometimes they’re good, sometimes they’re awful, but they’re always opinionated. A new service, Clerk Dogs, hopes to take the best of those recommendations to the web.

The premise is simple: It’s a movie recommendation engine. While there are plenty of those on the web for music (Pandora, Last.fm, imeem, Mufin and now even iTunes is doing it), movie recommendations have been a tougher nut to crack. The online movie rental service Netflix does as good of a job as any, and even it had to create a million dollar Netflix Prize competition to crowdsource making its recommendations better.

It’s been over two years and no one has won the Grand Prize, which requires just a 10 percent improvement on Netflix’s own Cinematch technology. Thousands of team have tried — it’s a tough challenge.

So one can sympathize if Clerk Dogs isn’t exactly perfect. But I will say it’s pretty good.

To use Clerk Dogs you simply input a movie into the “Start with a movie you love” box and hit the “match” button. The system returns results based on its “Movie DNA” system which include five variable attributes like “suspense,” “character depth,” “cinematography” and other film-related terms. A top result is shown as the “Clerks’ Pick,” while other matches are listed below it. 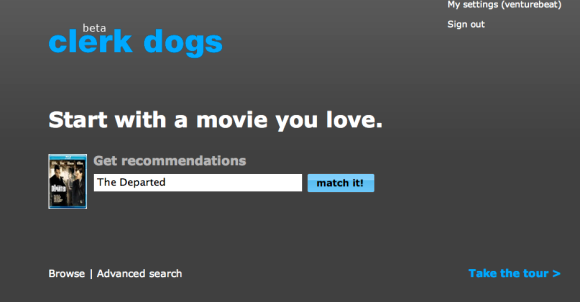 As an example, I entered the film The Talented Mr. Ripley. The Clerks’ Pick for me was Notes on a Scandal; having seen both films, I know that is a pretty solid recommendation. Other recommended movies include Ripley’s Game and Purple Noon (both of which have the same main character), a few Hitchcock films and Match Point. All of those are good recommendations to varying degrees.

If you don’t like the recommendations Clerk Dogs offers, you can “Mash It,” which mean you can tweak the Movie DNA to return a result more suited towards what you’re looking for. Say you want more complexity, just dial that up on the Movie DNA sliders. The results will refresh upon movement of the slider.

As a movie lover myself, I definitely find this to be a compelling service. I will say, however, that since I love movies so much, I have seen a lot of the ones recommended to me, so it’d be nice to have a filter of some sort if you want to find a new film to watch. On individual movie pages there is a button to make a movie as as “seen,” but the feature doesn’t yet work.

It would also be nice to be able to be able to watch films right on the site, but that is just a pipe dream. Huge companies like Apple and Microsoft have a hard enough time getting movie studios to agree to give them digital distribution rights to films, it’s unrealistic to expect a start-up to do that at this point. Instead, Clerk Dogs offers a link to Amazon if you decide you’d like to buy a movie.

There is also an area to watch a movie’s trailer, see any awards it has work and to see film critics’ reviews (though this area could be a lot more robust). 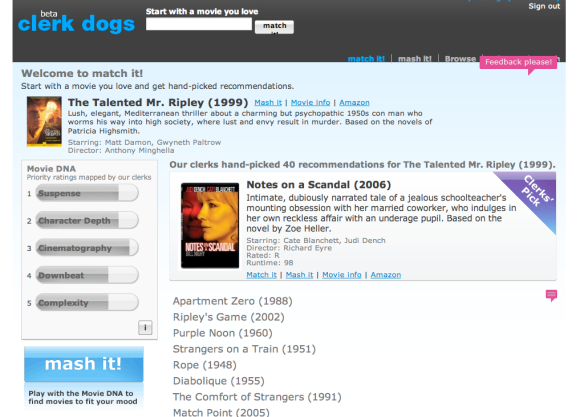 The worst thing I can say about Clerk Dogs is that its site design could use some work. It has a dreadfully plain logo, and the site as a whole feels too much like a rehash of many other “web 2.0” sites. Of course, look and feel is secondary to the technology underneath the site — and Clerk Dogs definitely seems to have something going for it in that regard.

As much as I love my Apple TV, it could really use something like this to recommend better movies based on what I’m searching for and/or watching.

Clerk Dogs founder Stuart Skorman has done everything from running brick and mortar video stores to starting Reel.com — which later sold to Hollywood Entertainment for $100 million. The five original writers for Reel.com are the ones behind Clerk Dogs.

Clerk Dogs is currently in closed beta testing, but you can sign up for an invitation here.