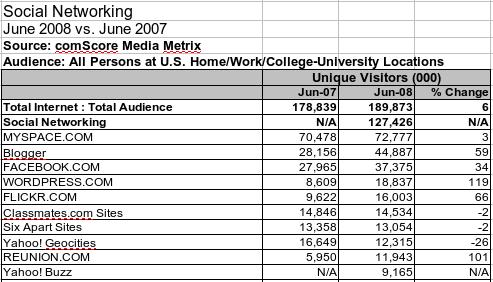 Facebook gained nearly two million new US users from May to June of this year, while MySpace lost about a million, according to the latest data from comScore. MySpace is still nearly twice the size, though, at 72.8 million national users versus Facebook’s 37.4 million. Facebook has, meanwhile, grown 34 percent since June 2007, while MySpace has grown only two percent. A range of smaller, niche social networks — and related social web sites — are also seeing solid growth.

One blog platform, Google’s Blogger, has grown from being slightly larger in the US than Facebook last year, to nearly 45 million users last month; another, WordPress, has more than doubled its user community to nearly 19 million; another, Six Apart and its various sites, has actually dropped by two percent. Six Apart, however, sold its Live Journal blog service this past year, which likely counterbalanced any growth it has seen on Typepad and other properties.

Meanwhile, Yahoo-owned photo sharing site Flickr has grown 66 percent over the last year to 16 million users — and that’s not the only Yahoo property to stay on the up and up. Yahoo’s new news aggregator, Yahoo Buzz, has passed the nine million user mark since launching less than a year ago. That growth was no doubt driven by users coming from the monster-sized traffic on Yahoo’s homepage that Buzz features are integrated into. It’s clear why Propeller would want to shift gears towards a Yahoo Buzz-style site leveraging its connection with AOL.com.

And, let’s not forget staid old social network Reunion.com, which has doubled from nearly six million users in June, 2007 to nearly twelve million this past June.

There are some smaller sites also seeing notable growth, but comScore won’t let me republish more than just the top ten in table format. So here they are:

Digg has grown from 4.4 million to 6.2 million — meaning Yahoo Buzz has managed to get way bigger, way faster.

LinkedIn, a business networking site, has grown 141 percent from 1.7 million users to 4.2 million in June. Still not huge, but its users are typically businesspeople with money to spend, so it may be easier to monetize than many of these other sites.

And finally, there’s not all bad news for maligned old web conglomerate AOL in the report. Sure, its AOL Hometown site has dropped 34 percent to 5.3 million users, but check this out: Its new AIM instant message profiles have grown from zero to 7.5 million, and its AOL Community site has grown 8,703 percent to 3.6 million users.

Final note: As always, you have to take third-party data analysis with a grain of salt, as each firm’s measurement methodologies may differ from companies’ internal numbers. For example, while comScore reported that Facebook had 123 million worldwide users last May, Facebook itself has more recently claimed only around 80 million.