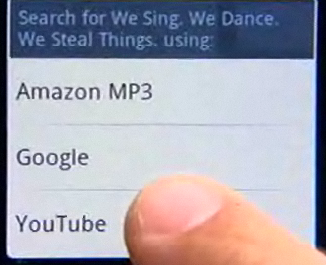 Amazon will have a media store launching on Google’s Android platform, just as VentureBeat first reported yesterday. It will launch on the G1 device which will be available on October 22 through T-Mobile. The over 6 million DRM-free songs from all four major music labels and thousands of Independent ones will be available to buy and download right to the device.

One thing that isn’t mentioned in Amazon’s press release is video. While it certainly seems feasible that eventually Amazon’s video store will make it to the device, that doesn’t appear to be ready to go at launch. Watching the video of it in action at the unveiling press conference today, it’s entirely possible that our source simply saw the YouTube video clips on the device and assumed it was Amazon’s video store. (The two are very close to each other in the demo video that was shown — see the picture at the top right.)

It’s hard to argue with an entire catalog that is DRM-free, whereas much of iTunes is still not DRM-free, despite Apple chief executive Steve Jobs’ claims that Apple was working on making that happen. The music labels, it would seem, are determined not to give Apple any more power in the market, and instead are backing rival services like Amazon with DRM-free tracks.

One thing that isn’t great about Amazon MP3 on Android is that you’ll need to be connected to Wi-Fi to download tracks. You can search, browse and listen to samples of songs over a regular mobile connection, but you will need the faster Wi-Fi one to get the music onto your device. Of course, the same is true for the iTunes store on the iPhone as well.

The G1 will come pre-loaded with the Amazon MP3 application at launch. 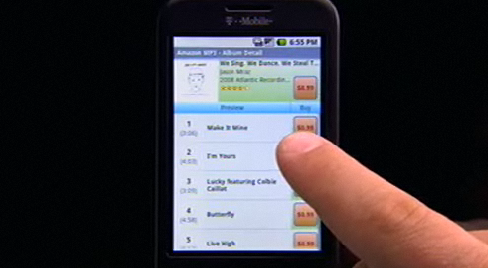