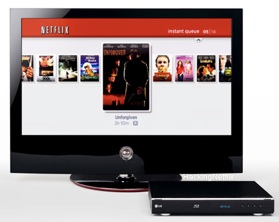 Ever since Apple beefed up its Apple TV offering by announcing support for movie rentals from all the major movie studios back in January, the battle for digital distribution supremacy in the living room has been heating up. Recently, there’s been a string of big announcements and today brings another: LG is releasing a Blu-ray player this fall that will have the ability to stream Netflix movies to your television.

If this sounds familiar, it’s because this marks the third announced device that works with Netflix’s “Watch Instantly” streaming-over-the-Internet service. Previously, Netflix rolled out its box with startup Roku, and then it announced a partnership with Microsoft weeks ago to bring the funtionality to the Xbox 360 gaming console. Netflix previously announced that it had a deal with LG to put its movies on one of its devices, but it wasn’t clear what that would be until today.

The LG BD300 will offer something no other set top box yet has: A combo of Netflix “Watch Instantly” and Blu-ray high definition video disc playback. The device will also offer other perks that have become standard with Blu-ray players such as up-conversion of old DVDs to near-HD quality. The Netflix content will be streamed in standard definition.

This new box may throw a wrench into the plans of people who are looking for the best way to get movies from over the web onto their televisions. The Roku box with Netflix is cheap ($99) and is selling well. The company has also hinted it will open the box to more services beyond Netflix in the future, though it’s not clear what those will be. The Apple TV offers a great experience and a good amount of content, but it’s a bit more expensive ($229 or $329) and is limited in high definition content. Microsoft’s Xbox 360 has both new release rentals and soon will have Netflix, but it’s selection is still rather limited and it too is more expensive. 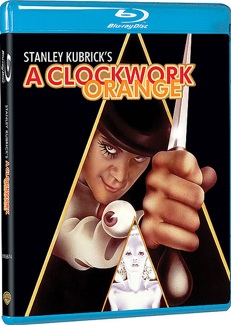 Meanwhile, Sony’s Playstation 3 is starting to offer digital movie rentals, including some films this fall before they come out on DVD, and has a Blu-ray player, but it has no deal with Netflix.

There are other options as well such as Internet streaming video startup Vudu, but the ones mentioned above seem to be the key players at this time.

LG says that this new Netflix enabled Blu-ray player will be “well under $500,” according to PaidContent. For all we know, that could be $450, which would still be a very steep price to pay compared to some of the other options. However, if the two things that most interest you in a living room box are Blu-ray and Netflix Watch Instantly capability, this appears to be the box to get now.

Otherwise, you might be better off waiting for a Blu-ray add-on for the Xbox 360 (the device had an HD DVD add-on before that format was discontinued) or for the Apple TV to add a Blu-ray optical drive. Apple has long been a member of the Blu-ray Disc Association, but has not yet released any product that uses the format. It’s certainly possible that it won’t in favor of digital distribution through iTunes.

Or you could just wait for the first of these boxes that offers Hulu streaming. The NBC and Fox-backed online streaming site for premium television and film content has proven to be a hit on people’s computers but is not yet in the living room.