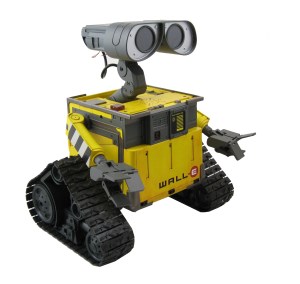 Robots aren’t just for hobbyists anymore. The programmable gadgets have taken off thanks to the efforts of tech-oriented companies such as WowWee, Sony, Ugobe and LEGO. But the market may be ready for a whole new level as Disney enters the market tomorrow.

Disney Consumer Products is announcing Wednesday that it will make programmable toy robots based on Disney characters, with the first robot debuting at Maker Faire, a geek fest at the San Mateo Fairgrounds in San Mateo, Calif., this weekend. We can thank a new Pixar movie coming this summer for Disney’s decision to bless this market.

The toys are inspired by “WALL·E,”  the cute robot (sort of like a clone of E.T.) from the Disney-Pixar film coming this summer. Another robot will be based on Tinker Bell the fairy from “Peter Pan.”

The Ultimate WALL·E robotic toy and the iDance WALL·E dancing boombox will debut in June; the remote control Tinker Bell flying toy will be available this fall. Disney hasn’t been a player in robot toys, but it did invest in entertainment robotics in the 1960s when it put Audio-Animatronics technology into its theme parks, particularly Disneyland’s Enchanted Tiki Room. (And who could forget good old Abe Lincoln at the “Great Moments With Lincoln” exhibit in Disneyland — oops, I’m showing my age).

Designed by Disney, Pixar animators and Thinkway, the Ultimate WALL·E robot has 10 motors for lifelike movement. With voice activation and a follow-me mode, WALL·E can follow the sound of a human voice and detect someone entering a room. The robot has a variety of sensors that let it hear, navigate, and detect obstacles. It will sell for $189.99. The iDance WALL·E has USB ports, can play MP3 music, and has an audio in-jack that works with any iPod or MP3 player. It will sell for $24.99.

Disney worked with WowWee to make the flying Tinker Bell toy robot, based on WowWee’s FlyTech technology. It will sell for $39.99 starting this fall. Beyond toys, robots are taking off in other respects. Microsoft launched a software development kit for programmable robots. Sony introduced its Rolly spinning toy robot, even though it discontinued its expensive Aibo robots. And iRobot is for both hobbyists and household cleaning applications.