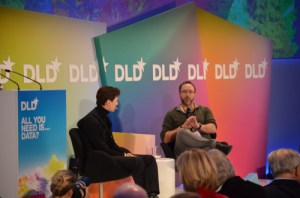 The founder of Russia’s largest social network proclaimed his love and support for Wikipedia today by promising to donate $1 million to the not-for-profit organization while onstage at the Digital Life Design conference in Munich.

Twenty-seven year-old entrepreneur Pavel Durov founded Russian social network VKontakte, or VK for short, five years ago. The site has grown to 33 million daily unique visitors, 17 million monthly active users and a total of 160 million registered users. VK, he said, is the reason why Facebook has yet to be successful in Russia and is the fourth most-viewed website among Europeans, according to comScore.

But Durov has an unabashed appreciation for Wikipedia and said that the site serves as a much more altruistic and important web service than his own for the larger global community. And so Durov, who finds the unpredictable financial future and fundraising efforts of Wikipedia troubling, pledged to donate $1 million to support the cause, marking the first time anyone has used the DLD stage to make such a donation.

Wikipedia founder Jimmy Wales was onstage to witness Durov’s compassionate financial vow. “How old are you?,” Wales asked Durov. I wish I could give away $1 million when I was 27, he joked.

The donation comes just weeks after the Wikimedia Foundation, the non-profit organization behind Wikipedia, announced that it had gathered a record $20 million from more than one million donors during its 2011 online fundraising efforts.