On Monday, Facebook banned SocialHour and SocialReach, two of the larger advertising networks on its developer platform. A main reason: These companies were running banner advertisements within applications that purported to show users things that their friends had done — but actually hadn’t. A common example: “Hey Anthony! Dean’s IQ is 156 and he challenged you to an IQ quiz, are you smarter than Dean?” but without Dean ever having taken the quiz in the first place.

A lot of application developers aren’t happy, as a result of the ban — some are seeing revenue declines of more than 50 percent following the ban. They’re turning to ad networks that are less profitable for them but less likely to disappear from the platform due to policy violations.

And, there’s a deeper issue that Facebook, like the rest of the web, hasn’t fully dealt with yet: Deceitful advertisers. The ones using ad networks like SocialHour and SocialReach. An underbelly of companies have been busy tricking Facebook app users into clicking on ads for quiz games, then directing them to quiz game sites that convince them to share their telephone number. Then, using the promise of texting the user with the result of the quiz, and more, these companies are actually using the contact information to sign the user up for expensive premium texting contracts. Suddenly, as a result, the user starts getting charged on their phone bill every month for some crappy texting service that they didn’t even realize they were signing up for. 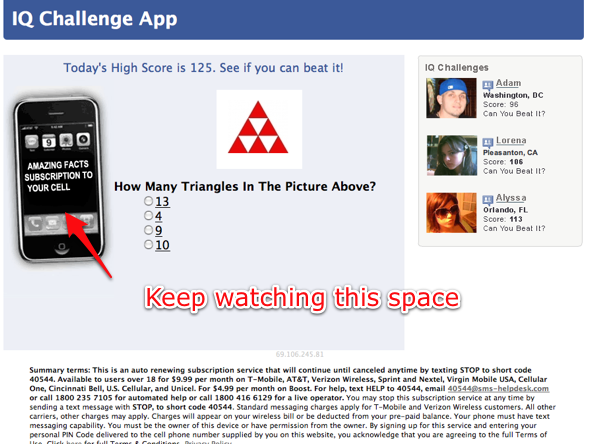 The scam ads are the evil cousins of perfectly legitimate affilate marketing done on Facebook and around the web. One developer estimates that more than 50 percent of the people using Facebook’s own self-serve advertising service are affiliate marketers. These marketers can go to a large ad network site like Azoogle.com, which offers “turnkey solutions” specifically designed to match Facebook developers with a wide variety of potential advertisers. Marketers can figure out how much they can make from an a given ad, calculate it against the cost of running ads on Facebook, then run the ads and make a profit. Most of the ads you see, like “download duck hunt for free,” “get whiter teeth” or “save this trapped animal,” are individuals or small teams trying to arbitrage between larger ad networks and Facebook. The more sophisticated players have built these networks to run across Facebook developers’ applications, so the developers don’t have to deal with the process themselves. The actual quiz sites that these networks link to are quite often run by companies two or three times removed from Facebook — and other social networks’ platforms.

Of course, shady ads and scammy sites like this have existed on the biggest platform of them all — the web — for many years. The same thing, to be clear, is also happening platforms offered by other companies, including rival social networks like MySpace as well as Apple’s iPhone (see screenshot of an iPhone app scam for a sample of that). Scammy quiz sites and such probably will continue to until the Federal Trade Comission decides to take action. Facebook’s 200 million user site and thousands-strong developer community has been the biggest green field for these advertisers. All of the social data about users, and the growth of the platform, means a new place and new methods for tricking people. 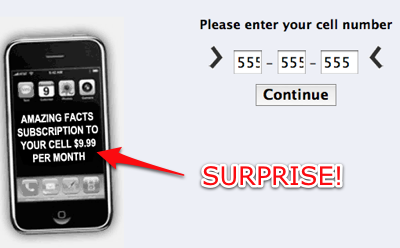 SocialReach and SocialHour were banned for misusing Facebook user content, and misleading users about what their friends were doing — a perversion of the “social graph” of friend relationships that makes Facebook valuable in the first place. These companies would figure out who a users friends were, display those peoples’ profile pictures and other information on their ads, and then claim that the users had taken an action and asked the user to respond. Sometimes, when a user clicked through the ad to the quiz’s landing page, they’d again see pictures of their friends — furthering the deception about their friends’ activities. Facebook prohibits sharing user information with third parties without the users themselves granting permission.

Both companies were confronted by Facebook within the last couple of weeks — after having been active on the platform for many months. I’ve tried contacting both companies earlier today and haven’t heard back. But it’s pretty clear what happened. Neither complied with Facebook’s demands, so Facebook blocked them from the platform Here’s what Facebook told me about how it went down:

We’ve received some reports of deceptive content in ads placed within apps by developers.  These ads are not from Facebook but we are concerned about any potential threat to our users’ experience.  We have had the ads removed from a number of apps and prohibited two advertising networks from providing services to applications on Facebook Platform because they were not compliant with our policies and failed to correct their advertising practices.

The thing is, there are all sorts of shades of gray when it comes to advertisers on the platform. Facebook has taken a somewhat lenient approach to what sort of advertisers can get into the site. Its developer terms of service allow all sorts of advertisements on its platform. Among the third-party ad networks left active on Facebook, perhaps the most prominent company is SocialCash, which I’ll discuss in a minute — others include RockYou, Social Media and Cubics, as well as Facebook itself, via its self-serve social ads.”SocialReach and SocialHour weren’t always doing crappy things, and the other ‘good guys’ weren’t always doing great things,” one industry insider points out. 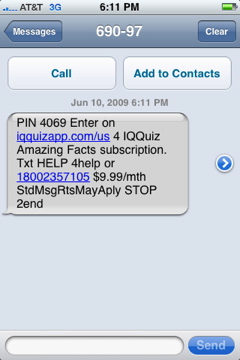 Facebook is trying to be proactive about scam ads, though. Here’s what the company tells me:

We haven’t completely solved the issue of scam ads. I don’t know of anyone that has. However, we are very proactive in this regard—we have consistently tried to stay ahead of scams by continuously evolving our enforcement—from stimulus ads to work from home to “google cash” to this latest incarnation, we have driven a number of different scams away from Facebook on our own initiative. We have a track record of responding and taking action without external prodding. The FTC lauded us for banning the stimulus ads before they even raised the issue with Yahoo and Google.

To get a sense of the gray area, another company, SocialCash, has some similar ad offerings to the other two rivals, but has managed to stay on the right side of Facebook. Let’s take a look at a SocialCash ad on the application We’re Related. SocialCash uses information about your friends to promote competition — without actually saying that your friends have challenged you. Click through, play the quiz and you’ll see the site that SocialCash directed the user to does indeed tell you about the charge you’ll incur when you give the company your number — by disguising that information within a graphic on the interface.

When you play the quiz, at first the graphic, an iPhone, says “AMAZING FACTS SUBSCRIPTION TO YOUR CELL PHONE.” Once you take the quiz, you see a box that asks you to input your cell number. Meanwhile, the text in the iPhone graphic has slightly changed to “AMAZING FACTS SUBSCRIPTION TO YOUR CELL PHONE $9.99 PER MONTH.” Or in another example of not-so-full-disclosure, these sites will hide the text about subscriptions in a corner of the site, using text that blends into background colors. Once you give ad your number, it sends you a text message with a PIN number to activate whatever you’ve signed up for, along with information about the cost of the service. Once you’ve got to the stage, though, you’ve already started paying.

SocialCash, however, appears to generally be compliant with Facebook’s developer terms of service; and anyway, it works with more than 150 other advertisers besides mobile. It has also released interactive ad units that allow fully legitimate advertisers like Netflix use its service. Some more details on how it works, here.

Forget what’s best for all developers on the platform, many developers are upset about the disappearance of SocialHour and SocialReach. Some have seen more than a 50 percent drop in advertising revenue since the ban, says one insider with a good view of the market. While two key players may be out, the incentive among developers to run ads from scammy companies will persist because these ads make more right now than other forms of advertising. As he put it to me, “we run these ads but you feel bad about it because you know that every time you make a dollar, it’s because some 16 year-old girl has clicked through and is getting stuck with a contract she doesn’t want.” Many, I hear, are going to SocialCash. 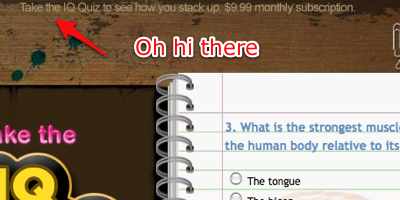 Deceitful ad networks and deceitful advertisers are stifling honest innovation in making money on the platform, a point Nick O’Neill at AllFacebook has already been hammering home. As insiders have described to me, the scammy advertisers are so successful at scamming users that they can afford to outbid legitimate advertisers for advertising space in applications. They pay higher rates to developers when users click through. The result, notes a developer who works with Fortune 500 advertisers, is that big brands with fixed budgets end up being able to experiment with fewer Facebook ads.

Brands spend billions of dollars on advertising — mostly traditional advertising — every year. Once they can figure out how to gauge their return on investments in Facebook advertising, they can start running more ads. Eventually, the CPM rates go up as more and more advertisers figure out where ads are worthwhile for them. But it’ll take a lot longer to get there if the deceitful ads continue to stifle innovation.

This issue doesn’t just apply to banner ads on the platform. Games on Facebook have been making lots of money from offers, where you can earn points in a game in exchange for taking what too often turn out to be these tricky ringtone services. There are, to be sure, also honest offers and direct payment options within many games — but as with the banner ads, the honest guys get outbid by the not-so-honest guys.

Still, more honest ad networks in Facebook are already seeing some benefits from Facebook’s ban, and not just SocialCash. “We’ve already seen a bunch of publishers reaching out to us as a safer, more user-friendly, and still profitable alternative,” says Dan Greenberg of Facebook video ad network ShareThrough.com. “Our video advertising may not always monetize as well as some CPA ad networks, but we still earn Facebook developers $3 to $10 eCPMs [a measurement of how lucrative ad impressions are] and our publishers love that their users are watching entertaining videos within their applications rather than being driven offsite to complete an offer.”

In sum, the presence of so many bad advertisers on Facebook calls into question some portion of the $500 million total revenue run rate that developers are collectively on-track to make this year. If developers collectively want to improve the Facebook ecosystem — and sustainably grow their revenues — they’ll need to think about ads and offers that actually provide value to users instead of hurting them.