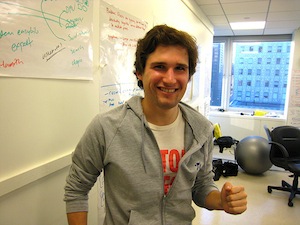 File-sharing service Drop.io announced today that it has been acquired by Facebook.

The New York startup’s blog post said that the social networking company has bought “most of Drop.io’s technology and assets” and that chief executive Sam Lessin (pictured) will be joining Facebook. It sounds like Facebook won’t be hiring the rest of the Drop.io team, though when I asked Facebook directly, it only said: “We can confirm that we recently completed a small talent acquisition for Drop.io and acquired most of the company’s assets. We’re thrilled that Sam Lessin will be joining us at Facebook.”

Drop.io is also shutting the down its service. It will no longer allow users to create free “drops” (filesharing pages), and current users are being asked to download all their files before they’re deleted on Dec. 15.

This follows Facebook’s pattern with previous acquisitions like Hot Potato and FriendFeed, where its aim was to hire an executive or a team rather than add a service or new technology. (At least it kept FriendFeed running, albeit without real support.) At this year’s Startup School event at Stanford, Facebook CEO Mark Zuckerberg said, “We have never once bought a company for the company. We buy companies for excellent people.”

Lessin has a history with Zuckerberg, according to David Kirkpatrick’s book The Social Network, having gone to Harvard with him and introduced Zuckerberg around New York during Facebook’s early days.

Drop.io raised $3.95 million from RRE Ventures and DFJ Gotham, most recently in 2008. Given the timing and the relatively small amount of the funding, it seems likely that Drop.io needed to raise more money now-ish if it wanted to stay in business — and without new funding, it got acquired.

Update: Drop.io actually raised another $4.85 million earlier this year, according to a regulatory filing. It looks like the company was trying to raise $6 million, so it was still about a $1 million short — and that may be why there was no coverage of the recent round. So that weakens my speculation, but I don’t think it completely kills it … maybe?