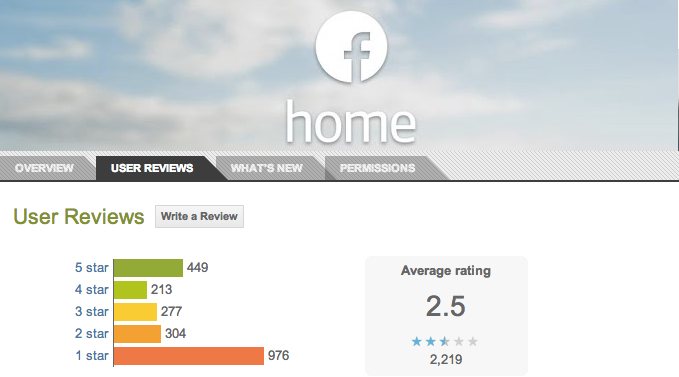 A day after Facebook released the software on Google Play, the app has garnered 2,219 reviews, with an average rating of 2.5 stars. Some 976 people left a one-star rating.

Bottom line: 43 percent of all reviewers are giving the poorest rating they can.

Most reviewers express disappointment that the feature is just a launcher and that it puts them further away from their chosen home screen carrying their dashboard of apps.

Notably, even some reviewers who give higher ratings to Facebook Home said they probably wouldn’t use it. For example, one user who gave it five stars called it “slick,” but said it is really for people who can’t live without Facebook. The reviewer said he’d uninstall it and prefers the normal Facebook app:

In a review of the HTC First, the first phone with Home pre-installed, our writer Jolie O’Dell gave Home high marks for making Android playful and helpful immerse us in Facebook news feed items that we’d normally miss. However, she has some reservations about privacy on the device and how much personal and location data will be shared with Facebook.