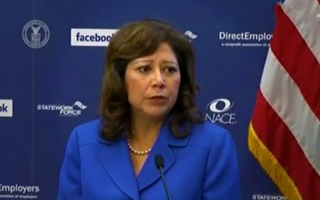 Facebook is partnering with the Department of Labor and other government agencies to help unemployed Americans get back to work, the company announced today in Washington, D.C.

The Social Jobs Partnership, as the initiative is properly called, will “help to close the gap between people and employers, said Facebook’s VP of global public policy Marnie Levine.

The partners in this initiative realize that people are already using social media to find jobs and that companies are using social networks to both find and screen candidates. So the government and Facebook are trying to optimize that process to put a dent in the national unemployment rate.

“It represents the Obama administration’s committment to customer service on the most important issue of our time: helping people find work,” said Secretary of Labor Hilda L. Solis (pictured).

“There’s a gap we can’t seem to close,” Levine said. “There are great people out there looking for jobs and great employers who can’t find the right talent.”

The partnership has three primary parts. First, Levine announced a new Facebook page called Social Jobs, which she described as “a one stop shop for people looking for jobs. Think of this as a free online job fair.”

Second, Facebook is focusing on education. The social network will create targeted public service announcements on Facebook in the states with the highest unemployment rates and will also be distributing matierials to job seekers and employers.

Finally, Levine said, Facebook will be investing in new social technology to find new ways to help alleviate unemployment and will conduct in-depth survey research about the ways in which job seekers, college career centers and recruiters are using the social web. Using this research, partners will develop new ways to get job postings delivered virally through the Facebook site at no charge.

“Our labor market is changing, and so should the tools we use to find jobs,” said Levine. “This is really just the beginning.”

Unless you’ve been living under a rock, you might have noticed that a troubled economy and job creation have been at the forefront of a heated national political debate. From glitzy stages to gray streets, everyone’s talking about jobs.

And for good reason; unemployment rates in the U.S. today are higher than they’ve been since the early 1980s: 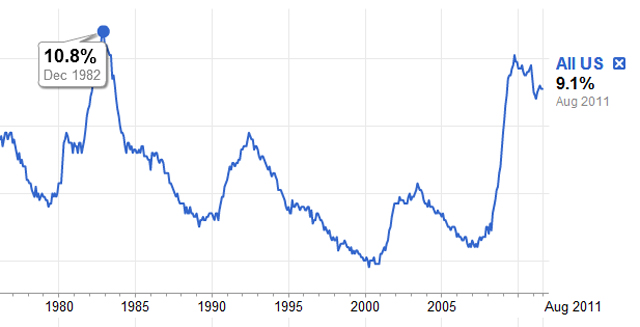 “We face a national crisis of joblessness for Americans,” said Marilyn Mackes, executive director of the National Association of Colleges and Employers (NACE). But there’s one thing the unemployed of the 1980s didn’t have going for them that modern job-seekers do, Mackes noted: “Today’s generation of college graduates never knew a world without the connections and access offered by the web.”

“Facebook began as a vehicle to connect people to people,” said Solis, adding that the network will now “connect people with jobs.”

Solis went on to announce a social media team within the Department of Labor (DOL), noting that while DOL has the tools, Facebook has the audience.

Next, the DOL will be connecting with Twitter, LinkedIn and other popular social sites to do better outreach.