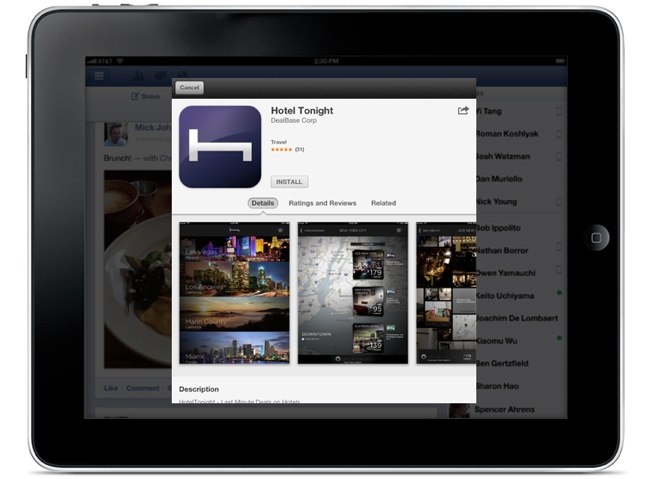 Facebook today made its mobile app install ads infinitely more attractive to app makers who want to pay to increase their downloads. The social network announced that members on iOS 6 can now download advertised applications from the mobile News Feed without ever leaving Facebook.

Mobile app install ads, formally launched in October, let iOS and Android developers buy prominent exposure for their applications inside Facebook’s mobile News Feed. Until now, the in-stream units directed members to Apple’s App Store or the Google Play marketplace to download the sponsored apps. Today, Facebook eliminated the extra step of leaving its social network, but only for people on iOS 6 devices.

“When they click on an ad, the App Store will appear in another dialog box. After installing the app, they will be able to continue where they left off on Facebook,” platform monetization product manager Deborah Liu wrote in blog post.

The change is a significant one for app makers. It makes the install process for members on iOS seamless, which means install conversion rates should shoot through the roof. For Facebook, the update could help it bring in a significantly larger amount of revenue from the relatively new mobile unit.

Facebook today also gave developers running the mobile app install ads the ability to customize their ad units with images and descriptions for their target audiences. The social network is also providing app makers with more demographic data on the Facebook members who install their applications. Mobile app install ad buyers can now break out new installs by age, gender, and country.