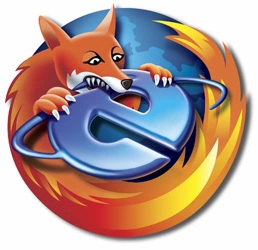 Mozilla’s Firefox web browser surpassed 20 percent worldwide market share for the first time last month, according to new data from Net Applications. That’s a huge milestone for the open source web browser, which was first released (the 1.0 version) by Mozilla almost exactly four years ago (November 9, 2004), at a time when Microsoft’s Internet Explorer had a choke-hold over the web browsing industry with a market share well over 90 percent.

Today, Firefox is firmly the second most popular browser out there. It continues to gain share even at a time when other companies are releasing new browsers on a wide range of new devices. Apple, for example, has seen great growth in mobile web browsing on its Safari web browser built for the iPhone. Meanwhile, gaming systems like Sony’s Playstation 3 and Nintendo’s Wii have web browsers built in as well (the PS3’s is built by NetFront, while the Wii’s is built by Opera).

And of course, Google, a huge financial backer of Mozilla’s work on the web, has recently entered the web browser wars with its own Chrome browser.

But all of those other browsers, along with Firefox, seem to be taking share away from Internet Explorer, which continues to sink in the 70 percent share range (currently around 71 percent according to Net Applications). Microsoft let Internet Explorer stagnate after version 6 was released in 2001. Version 7 didn’t come out until 5 years later, and by that time, Firefox easily had it bested in terms of both speed and features.

While maybe not terribly relevant, It’s worth noting that a lot of tech blogs out there have long since seen Firefox overtake Internet Explorer as the dominant browser of choice among readers. ReadWriteWeb noted earlier that over 55 percent of its visitors use Firefox (versus just 27 percent for Internet Explorer). Our visitors aren’t quite as Firefox-loving, but still easily make up the largest percentage of visitors (44.6 percent to IE’s 36.5 percent).

The latest version of Firefox, 3, was released back in June. Mozilla continues to improve it, recently adding features such as built-in geolocation.