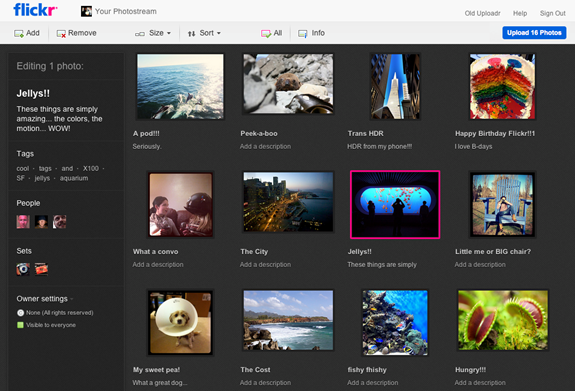 After eight years and 7 billion photos, Yahoo-owned photo sharing community Flickr is giving members a better, faster way to post and share their images on the site.

Flickr is in the processing of rolling out a revamped photo upload tool, appropriately named “Flickr Uploadr,” that sports drag-and-drop support, includes photo thumbnail previews, allows for easier arranging and tagging, and is said to be 20 to 30 percent faster at uploading photos.

“We’re excited to introduce a faster, easier uploading experience that underscores the importance of the story behind each photo,” Flickr head of product Markus Spiering told VentureBeat. “This is a significant step in the evolution of Flickr, and you’ll continue to see changes to the site aimed at creating more beautiful, relevant experiences for our community.” 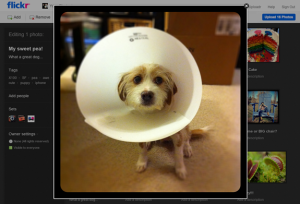 The new tool, written in HTML5, is specifically tailored around the bulk photo-uploader. Members can grab a smattering of photos, drag them to the browser, arrange them into sets, add tags and descriptions, set licensing terms, tag friends in photos, and adjust advance settings all before clicking to publish photos to Flickr at enhanced speeds.

Flickr has also increased file size restrictions to support even higher resolution images. Members on the free plan can now load photos up to 30MB in size, while those who pay for Pro accounts can load files up to 50MB in size.

Uploadr replaces Flickr’s rather rudimentary browser-based photo upload tool, a pain to use when uploading large quantities of photos. The new uploader may also encourage more users to get organized (and descriptive) when posting and sharing photos on Flickr.

Uploadr is part three of an ongoing, year-long makeover initiative for Flickr. Yahoo kicked off the Flickr redo with a new Contacts page in late February and followed that up with an updated photo editor at the beginning of April.

As Yahoo shows a tardy, but renewed commitment to Flickr with somewhat minor, incremental updates, Facebook has taken a much splashier approach to ensuring it remains top of mind for online photo-sharing. The social network swiftly purchased mobile photo phenom Instagram for roughly $1 billion in cash and stock, and just amended its S-1 to show that it now sees upwards of 300 million photos uploaded to Facebook per day. Flickr members, for comparison, upload 3.5 million photos per day.

Flickr Uploadr is being dolled out to users on a rolling basis over the next few weeks, the company said. Yahoo will only support the tool on Chrome 6, Safari 5, and Firefox 8 and above browsers.