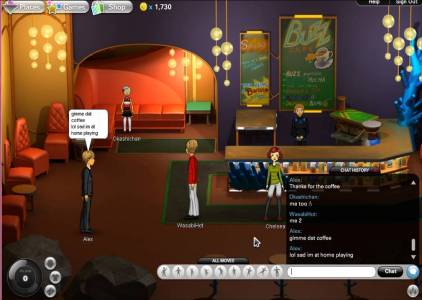 Tweens are getting into the online gaming world at younger ages and FlowPlay is launching yet another virtual world to target them. There is a lot of competition, including rival start-ups that I wrote about in the past week or so. (here and here).

FlowPlay (our past coverage) is targeting slightly older kids, or tweens, including those who play in worlds such as Habbo, a hotel where kids can decorate rooms. Habbo is immensely popular but has relatively modest production values.

FlowPlay’s first virtual world is ourWorld, a place for tweens to gather in a Flash-based animated environment. They can create their own two-dimensional avatars, pick out clothes, and engage in activities like being a barista. As a barista, a kid can earn money to buy more goods in the world. The coffee part isn’t too thrilling. My 11-year-old gave it a whirl. You just walk up to a counter, put on an outfit, and then click a “make coffee” button. The coffee appears. That’s not particularly compelling game play and is reminiscent of the failed Sims Online from years ago. We played some of the games, including “Bubble Tanks” where you capture and shoot bubbles. Cute. ButI don’t think my kid can talk me into paying $6 a month for such simple games. So much else is free on the web.

The avatars can “level up” to a point and, if they want to keep moving up, they have to pay for a subscription of $6 a month. With the subscription, a kid can get more privileges, including an apartment. The company also hopes to make money with branded objects available for sale. Those branded objects can be sponsored by a number of real-world companies.

ourWorld is the first of a number of virtual worlds that FlowPlay plans to launch. FlowPlay was founded in 2006 by veterans from Google, Yahoo, Microsoft, Real Networks and Classmates.com. The company has raised $3.7 million in funding from Intel Capital, Skype’s founders, and angel investors.

The world launched its public beta on April 1. The world has dozens of casual games and activities that encourage collaboration, including missions that can be accomplished together for rewards. It has chat, shopping, video watching, and content creation. The latter includes a technology that allows kids to create their own custom objects which they can sell or trade to gain Flow, a form of virtual currency. The world has multiple towns with different themes, like The Pier or The Boardwalk.

Wanda Gregory, a vice president at FlowPlay, said the activities should appeal to people who like to score well in games, socialize, or just explore. DFC Intelligence estimates the worldwide online game market will hit $13 billion by 2011. The company built the world with a team of 40 employees and contractors in Seattle, Shanghai, and India.