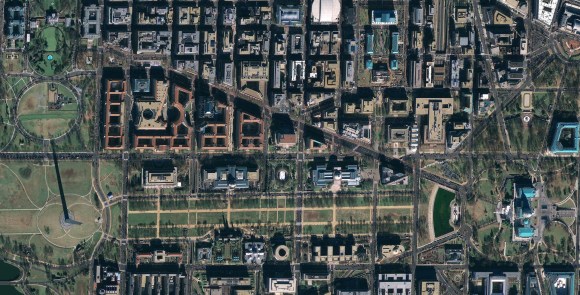 GeoEye-1, the powerful imagery satellite that is perhaps best known as the “Google satellite” (because Google has a deal to use its pictures for its Google Maps and Google Earth products), will be focusing its lens on the Inauguration of President Obama next week. The company notes that while there will be plenty of cameras covering the event on the ground, and some in the air, GeoEye-1 will be the only one offering a perspective from space.

The satellite will be 423 miles above Washington, D.C. on January 20 at 11:19AM EDT. While it will be moving 17,000 miles per hour, it will still be able to look down at the Earth and see objects about a half meter in size. The image above (which I actually had to shrink due to upload size limits) is one the satellite took a few weeks ago of the area. Last month, we posted a picture that the satellite took of Google’s campus.

It’s not Google who is requesting these images, and it’s not the government either. Instead, it’s a company initiative by GeoEye.

If you’d like some to see some footage a bit closer up on the action, you may want to check out one of the live streams.

Update: Here are the pictures from President Obama’s inaugrual, as seen from space.