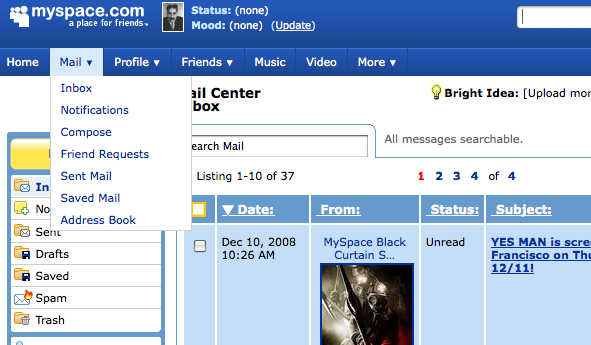 While Yahoo and other established email service providers are working to make their services more social, some social networks are trying on making their user messaging features more like email. The latest is MySpace — the largest social network in the U.S. — according to TechCrunch. MySpace has already moved some employees to company accounts, changing employee@myspace.com to employee@myspace-inc.com addresses in order to make room for the company’s tens of millions of users. Given the plethora of strange user names on MySpace, get ready for those to turn into some email addresses: imsatan666timesmorethanyoucaneversay@myspace.com, numberonet1lat3qu1lafan@myspace.com, etc…

The product, which apparently will include the same features you see on Hotmail, Yahoo Mail and Gmail, could make MySpace more central to the lives of its users. Notably, smaller rival Bebo has already launched a “social inbox,” that includes integration with, AOL Mail, Yahoo! Mail and Gmail, as well as feeds to help you keep track of what’s happening on other services around the web.

Details on MySpace’s plans are scant, but I’m intrigued by this direction among social networks. It’s natural for the networks to expand into email, because their typically rudimentary messaging features already have users talking to each other in a private, one-to-one format. I’m less convinced by the efforts of existing email providers to become more social, because their users tend to be older and so likely less interested in other social networking features, like commenting on friends’ profile pages. Maybe MySpace, Bebo, and others, can make themselves into the inboxes of the future, as their typically younger users grow older using them. MySpace, as TechCrunch points out, would already be the third-largest email provider in the world if all of its users were to use the prospective service.

Here’s the blurb MySpace sent over about the report:

Messaging is one of the most popular communication tools for MySpace’s 125 million users worldwide. We actively listen to the feedback we receive from our users and are constantly evaluating new ways to enhance the messaging experience for our community. Our recent collaboration with Google to introduce the first search and sort mail functionality into MySpace was extremely well received. We do not comment on company rumors or speculation but will share more details on additional product plans when we have news.