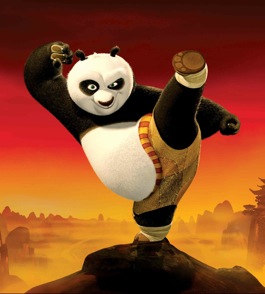 When DreamWorks Animation chief executive Jeffrey Katzenberg took the stage today at the Intel Developer Forum (IDF) stating that he was about to show the “greatest innovation to occur in the movie business in 70 years,” I was skeptical. By the time he left the stage, I was sold.

This innovation is 3D filmmaking. But wait, “Wasn’t that around in the 1950s?,” you might say. “This is not your father’s 3D,” Katzenberg stated.

DreamWorks (as well as other movie studios) is using Intel’s INTRU3D technology to take 3D filmmaking to new heights. No longer does the 3D experience involve two projectors working in conjunction and those odd red and blue glasses. Now it’s a single projector doing advanced computing to render an image that is viewed as three dimensional with the much more sleek RealD glasses (think Tom Cruise’s glasses in Risky Business — or see me in them below).

During his presentation, Katzenberg had a giant movie screen wheeled out and asked everyone to reach under their seats. Taped under them were the RealD glasses which he then asked us to put on. He proceeded to show a clip from DreamWorks’ hit film Kung Fu Panda — fully rendered in 3D.

I was sitting towards the back right corner of a huge room filled with thousands of people — hardly the ideal movie theater experience — and still, by the end of the several minute clip I felt totally immersed in the film.

But Katzenberg wasn’t done. After talking about filmmakers such as Robert Zemeckis, Steven Spielberg, Peter Jackson and James Cameron commitment to three dimensional films, Katzenberg had the lights dimmed again. This time he showed off a new film coming in March of next year: Monsters vs. Aliens.

This animated film was beautiful.

“3D is the next great frontier,” Katzenberg said. The first big transition in cinema was from silent to sound, the next was from black and white to color, this will be the third transition: from 2D to full 3D, Katzenberg stated. He revealed that by 2009 all of DreamWork Animation’s films will be both authored and offered in 3D. And this is where Intel comes in. 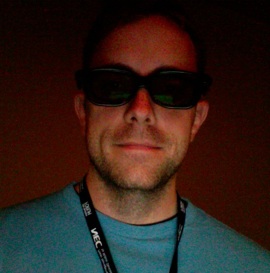 Katzenberg said that creativity has largely been something that has only been on the screen. Intel’s work with INTRU3D brings creativity behind the scenes he explained. It’s not just the end product you see that is truly innovative, it’s the way these films are made.

INTRU3D gives animators and filmmakers the tools to render 3D images in real time and manipulate them to make the clip they want. Before Katzenberg took the stage, a montage was shown of how animation was done in the old days — by hand. An animated film could take months.

Now it’s just a question of having enough computing power to render images.

This technology eventually will enter your home as well. In the Q&A session afterwards, Intel execs didn’t seem sure about how well it will take off there because the format still requires glasses, but said much work was being done to remove that restriction.

I’ve argued before that 3D films should stay in theaters as a way to keep people experiencing movies as the filmmakers intended. After all, screens can only get so big when they’re in your home.