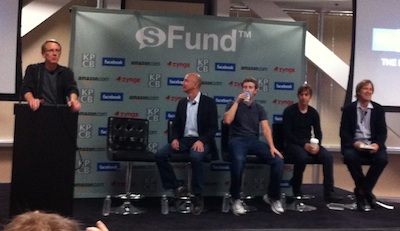 John Doerr, one of the best-known venture capitalists around and a partner at Kleiner Perkins Caufield & Byers, announced the sFund today at a special event at Facebook headquarters. It’s a new fund that I speculated about last night. It will be a fund for startups involved in “the social Web”, and it will total $250 million.

Doerr also brought four social startups from Kleiner’s portfolio to the event today. Three have already launched: iPad “social magazine” Flipboard, shopping site Lockerz, and Jive, which offers social networking services to businesses. Those companies aren’t actually part of the sFund, but Doerr said they would have been included if the fund had existed at the time of the investment. The first company to win a deal from the new fund is CafeBots, which announced the funding today. It’s still in stealth mode but describes its product as a “friend relationship management service.”

When asked who the sFund will actually invest in, especially when every website is adding social features, Gordon (who’s leading the fund) echoed a comment that Zuckerberg made earlier this morning: That they’re looking for companies focused on a specific social experience, rather than just “bolting on” social features to another product. I’m guessing they won’t invest in companies that plan to challenge Facebook or Zynga directly, either — not just because Facebook and Zynga are part of the fund, but because defeating those companies would be insanely difficult.

You can read more details about the announcement here.