With the first mobile devices running Google’s Android coming shortly, the development community at large seems apprehensive about the platform. After all, why develop for something that may or may not work when there is already a hot, new mobile platform out there, Apple’s iPhone, that has proven to be extremely successful? Well, the team behind the life update and emergency messaging application Life360 took the opposite approach.

“It was clear Android was going to be open,” Chris Hulls, a part of Life360’s core development team told me today. That openness and the fact that no details about Apple’s iPhone software development kit (SDK) were known at the end of last year when development of Life360 began led them to choose Android as a “concept car,” as Hulls puts it.

The bet paid off — literally. Life360 was chosen as one of the 10 winners of the first Android Development Challenge. The app, chosen from 50 finalists, won the team a $275,000 prize. Money which Hull says will go back into the development of the application.

You see, Life360 is far from complete. While it won the prize for its Android app, the service’s goal is to be on a variety of platforms serving as a backbone for messaging in times of crisis or for families hoping to keep track of one another. If someone is injured in an accident or a natural disaster occurs, Life360 wants to be your lifeline to people that can help. 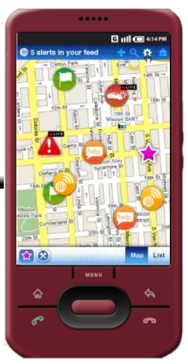 For example, if you’re in an emergency, you could push a panic button that you designate on your phone and have it place a pin on a map using your GPS coordinates, and send out an alert to your emergency contacts to let you know where you are and that you’re in distress.

This sounds a bit like how some people have been using the micro-messaging service Twitter in times of need. In fact, one man had the idea to try and build an emergency network with Twitter as its backbone.

But Life360 may be better suited for such tasks, because that would be a primary focus. But it’s not all about emergencies — the team is working on ways for families to keep track of one another more easily. For example, you could send your child out and know where they are and that they are safe. That starts to create privacy questions, but many parents would like such functionality.

The team likes to think of what it’s creating as a “passive social network.” That is, a network that is continuously running in the background, but only used when you really need it.

The whole “running in the background” element is exactly why Life360 works on Android, but would not work on the iPhone. The iPhone currently does not allow any application to run in the background. But that’s how Life360 needs to work — Hulls knows that no one will want to keep it open 24/7, and it’s not meant to work that way.

He says he is intrigued, however, by Apple’s upcoming Push Notification Service, which will give at least some background operations to applications. It’s still not clear how well that will work, but Hulls is optimistic that Life360 will comes to the iPhone soon.

Perhaps the most surprising things Hulls revealed in our conversation though is that Life360 won the Android Developer Challenge despite never having seen a phone running Android or even a prototype! The entire thing was built and tested using the computer emulator. 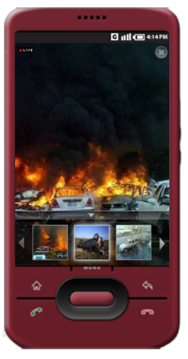 After being selected as one of the 50 finalists for the challenge, Hulls was certain that his team would get some handsets to work with. But that never happened. This is problematic because the team cannot possibly complete Life360 without having this access.

For example, it has a very cool-sounding feature that it wants to implement that would alert your emergency contacts if you were in a car accident. It would do this using a mobile device’s accelerometer to measure g-force. In theory, this will work, but it’s impossible to know for sure if it’s just running on a computer emulator.

Something else useful that it should be able to do is stream video and audio live from an emergency situation so contacts can keep up on the situation while en route to help. Again, that’s hard to test without a phone to test on.

We contacted Google asking why Android Developer Challenge finalists and winners had not yet received phones with which to work.

“To prepare for Android’s public launch, we are testing the platform on a variety of devices. This process ensures we have an opportunity to receive feedback from users. We have nothing to announce at this time but look forward to sharing Android updates with you in the future,” a Google spokesperson said in response.

Obviously, that’s vague and skirting the question, but separately we’ve heard that select mid-level people at Google and carrier T-Mobile are only now starting to see some HTC (the first Android phone maker) devices, but are being asked to sign non-disclosure agreements (NDAs) about them. So clearly they’re not quite ready to send out to developers just yet.

In terms of developing on Android, Hulls can allay some fears developers are having. Overall, the team has been very pleased with the experience, Hulls said. He added that his team much preferred developing in Java (the language that Android is using) versus developing in Objective-C (the language the iPhone uses). (He did, however, note that it was difficult to do good user interface, also known as UI, on Android versus on the iPhone because of all the tools Apple provides in the kit.)

As for some of the other developers complaining about the process of making an Android application, Hulls had this to say: “You’re always going to have people complaining about something. From my standpoint, [Google has] done very well.”

Life360 has taken some angel funding and isn’t looking towards a first round just yet. Hulls notes that its monetization plan will eventually include a subscription free for advanced services but that there will always be a free portion as well. In terms of fees, the group hasn’t firmly decided yet but Hulls noted that it would probably be something around $10 a month — a fee which will undoubtedly seem very worth it in a time of crisis.

We previously wrote a little bit about Life360 back in May when it was still known as Lread Emergency Manager. Good to see how far the application has come in such a short amount of time.