In the world of professional networking, having relevant and intelligent conversations is an important part. When you take the relationship digital, it’s far from perfect, especially on LinkedIn. On the social network, connections are certainly being made, but actual discussions takes place within its Groups product. A quick Google search paints an ugly picture, however: people don’t like it. This is all about to change.

LinkedIn has begun notifying group administrators of an upcoming remodel that reimagines the entire product in an effort to make LinkedIn Groups valuable for the more than 380 million registered users. Further, a standalone Groups iOS app will be released on October 14. 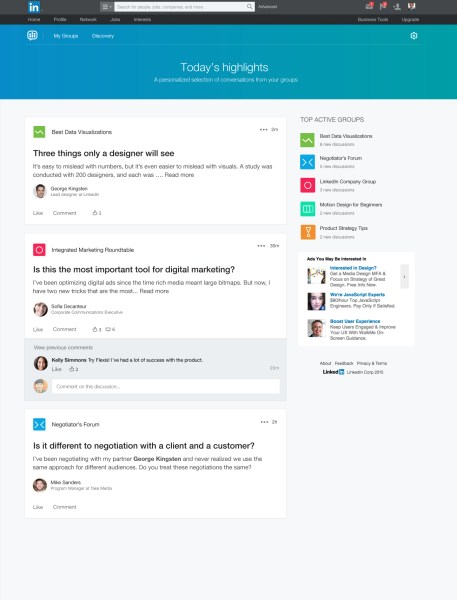 Launched in 2004, LinkedIn Groups became the town hall for people to gather and discuss issues with like-minded professionals. There are now more than 2 million groups on the network, but the quality just isn’t there. What will be different is that now all groups will be private to ensure the content isn’t indexed by search engines, and all members need to be vouched for in order to gain admission.

“We want you to be professional when you’re having conversations,” said Minal Mehta, LinkedIn’s product lead for Groups. “Groups is such a valuable part of LinkedIn. When it works and when I engage, what I get is amazing.”

When was the last time you looked at a group on LinkedIn? You might want to rethink that soon.

Starting next week, iOS users will be able to experience the new LinkedIn Groups standalone app. After you log in, you’re shown multiple options. The first is highlights, which shows you engaging discussions from each group you belong to. If that same discussion happens to be in multiple groups, highlights will only surface it once. Every day will have new highlights, and you can engage with that discussion right from the app. 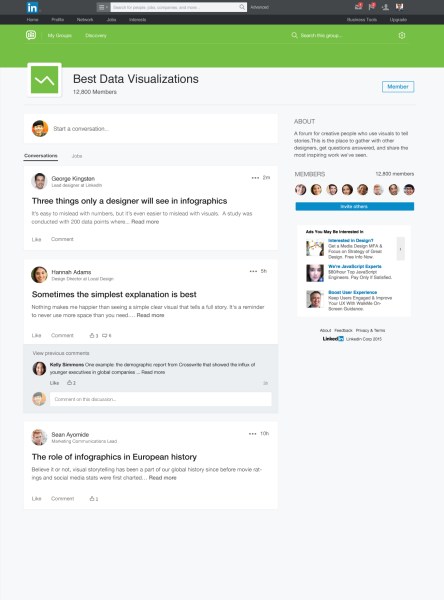 This mobile app uses a learning algorithm to make sure you’re shown content that really matters to you, not the spam people are accustomed to seeing in groups.

The next tab is where you can discover interesting groups and people. Prachi Gupta, LinkedIn’s engineering lead on this project, told us that the algorithm displays results based on skills you have, industry experience, previous group memberships, and more. All of these factors go into determining whether you’re shown a recommendation for a journalist group or for botany.

Unfortunately you can’t search for groups within the iOS app beyond what is displayed by the algorithm. However, that capability does exist on the website. “Research shows that users just don’t want to think,” Mehta said. That’s kind of true — after all, if the algorithm is so smart, why shouldn’t it already know what groups we’re looking to join?

Even the actual Groups page has undergone a refresh, cued with color-coding to help you recognize which group you’re interacting with. Besides that, users can now @mention someone to tag them to a post, although you’re not able to include anyone who’s not already part of the group. You can also insert images into posts.

Because some professionals are either looking for jobs or trying to hire talent within groups, LinkedIn has created a special tab within group pages that it hopes will be a hub for job discussions that won’t distract from the larger conversations taking place in the group.

And if you were worried what would happen with all the incessant emails that you typically receive from being in groups, don’t worry — LinkedIn has worked on minimizing it. 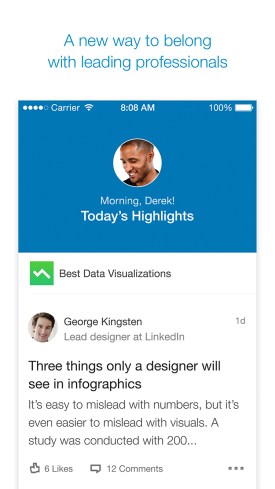 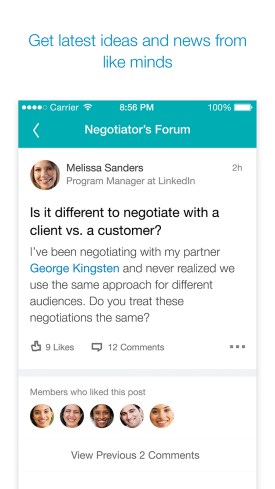 Visually speaking, both the web and mobile app interfaces appear cleaner, and you don’t feel like you’re being slammed with a bunch of spam. It’s about being professional, so start sharing insights with one another.

“The world has changed. The way people converse has changed,” Mehta told us, describing the rationale for the update. “How do we take the opportunity to make the product the best it can be based on where the world today?”

Next week, all groups will become private and implement this new version of Groups. And while the intent is to restore sanity and professionalism to one of LinkedIn’s oldest products, you’re still going to have to deal with a small number of users who simply just want to spam the entire group. 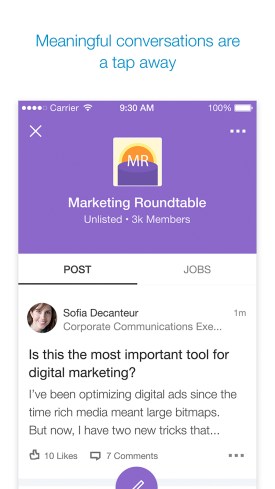 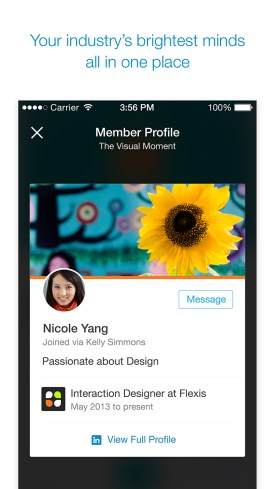 This is the latest mobile app in LinkedIn’s growing catalog. In April, LinkedIn created Elevate as a way to encourage employees to share content with their peer network; in June, it relaunched Pulse; and in August, the company debuted Lookup to help you quickly research information about your coworkers. And while most users will likely interact with groups through LinkedIn’s main app, Gupta said that the Groups app is more for power users.

Right now, LinkedIn Groups will be made available on the Web and on iOS devices. An Android version is coming, but no timeline was provided.

Here’s an example of an email group moderators will be receiving:

Hi X,
We’ve been inspired by members like you to make Groups the best place for like-minded professionals to meet and converse. As a valued moderator, we wanted to ensure you knew about the following upcoming exciting changes first.

In a few weeks, <Group name> will become an Unlisted Group where you can enjoy these new features. We’ll never show a unlisted group or its conversations to anybody who doesn’t belong until an owner or manager invites them. Groups like yours will be able to become Standard Groups by using the Group Settings menu. For more information on Unlisted Groups, <click for more details>. If you have questions, join the Group Moderator Community to learn directly from group moderators like you.

Thanks from LinkedIn Groups team.