LinkedIn ($LNKD) announced its second quarter earnings today as it nears the end of its time as an independent company. It was revealed that the company generated $933 million in revenue, with an earnings per share (EPS) of $1.13. And while LinkedIn counts more than 450 million members, what’s telling is how many of those are actively visiting the professional social network each month: 25 percent.

For those keeping track at home, Wall Street analysts had been expecting LinkedIn to report $898.3 million in revenue and an EPS of $0.78. So it’s a beat.

While that’s true, and the company has seen its cumulative member numbers grow 18 percent from last year, the percentage of what the company categorizes as “unique visiting members” — LinkedIn’s term for monthly active users (MAU) — has been relatively flat. In Q2, the company reported that out of 450 million members, an average of 106 million members visit the service each month. This was the same figure as last quarter, when LinkedIn reported it had 433 million cumulative members.

The unique visiting member metric became popular about a year ago, and if you look at the overall trend for LinkedIn, that percentage has been flat since Q2 2015. In fact, LinkedIn’s MAU has remained consistently around 25 percent over the past five quarters. 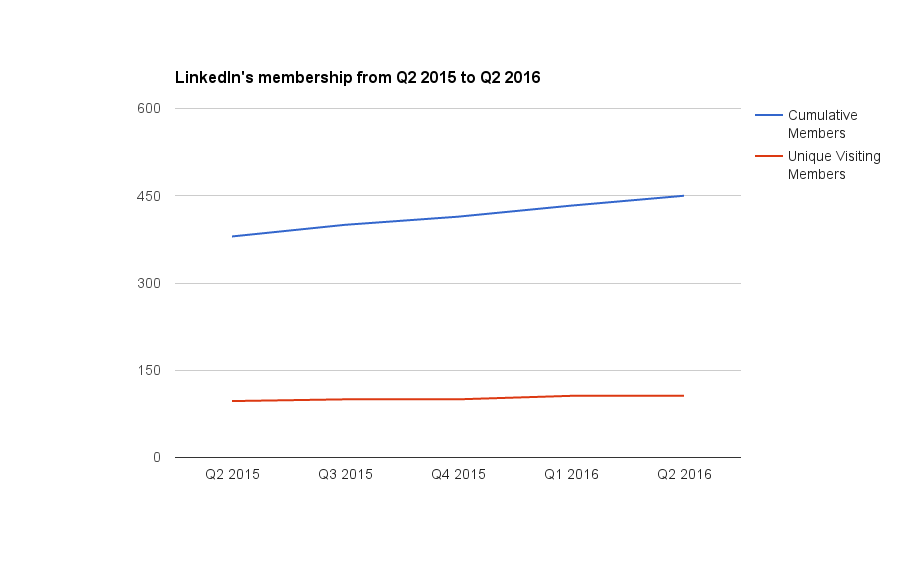 This latest quarterly earnings release comes in the shadow of LinkedIn’s $26.2 billion acquisition by Microsoft, which amounts to about $196 per share as part of an all-cash deal. Today’s report is likely one of the last glimpses we’ll receive of the company’s financial performance before it becomes the property of the Redmond, Wash.-based technology giant.

Talent Solutions continues to lead the way in terms of generating revenue for LinkedIn, growing 35 percent annually to $597 million, largely through its hiring programs. Its marketing solutions brought in $181 million for the quarter, a 29 percent increase from the year prior, and premium subscriptions contributed $155 million, up 21 percent year over year.

Because of its pending acquisition, LinkedIn offered no update to its fiscal 2016 outlook.