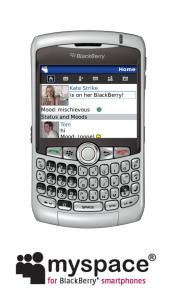 The MySpace application for Research In Motion’s Blackberry smartphones has been downloaded more than 400,000 times since it was introduced a week ago. The two companies claim this is an app download record for them. Its users have sent a total of more than 15 million messages and updated their statuses more than two million times so far, they say.

MySpace separately launched a mobile site specifically designed for Blackberry phones in early September, so I assume those who used that site must have jumped on to the new app.

Some more context: Rival social network Facebook launched the first version of its Blackberry app in late 2007, and it now has nearly two million users. RIM rival iPhone has been gaining market share over the last year, and both MySpace and Facebook have also launched apps for it. The latest version of Facebook’s iPhone app was added to the iPhone App Store in July of this year and is the 28th most popular free app on the device; MySpace’s iPhone app was added around the same time and is the 46th most popular free app.

More people still own Blackberry phones, though. In corporate America, for example, a new report by ChangeWave Research shows RIM with a 76 percent market share this month — but the iPhone has surged past Palm to take the number two spot with 14 percent. So this Facebook-iPhone user should stop his snide undertones; the early success of the MySpace-Blackberry app is something for those companies to be happy about. Especially as RIM works to penetrate the consumer market.

The bigger issue is the fate of mobile-focused social networking startups as social networking giants like MySpace and Facebook move deeper into mobile, an issue we examined in depth earlier this year. The key for startups will be continuous efforts to differentiate themselves. Loopt, a social networking company that builds services to show you the geographic locations of your friends, seems to be pulling that off. Its free iPhone app is at number 24 on the iPhone — ahead of both larger rivals.