MySpace has seen impressive growth in its mobile services over the last six months, especially outside the U.S. At the Mobile World Conference in Barcelona, I recently caught up with John Faith, the vice president and general manager for the social network’s mobile services, to learn more. In the interview below, he tells me about MySpace’s collaborations with mobile carriers, handset manufacturers and content creators around the world, to help it deliver a more compelling experience to mobile users.

The results of MySpace’s mobile efforts so far: In the United States, traffic to its mobile site and mobile applications grew 50 percent — but it grew 80 percent in Europe and 60 percent in Asia. Overall, more than 20 million of its 130 million users have accessed a MySpace mobile service. To be clear, 76 million or so of MySpace’s users are in the U.S. — this means growth rates will appear for smaller audiences in other countries. However, MySpace is trying to grow its presence internationally, and mobile has proven to be essential in that effort. The News Corp.-owned company is also launching a new version of its mobile web site this week (see screenshot below).

Note: I’ll be publishing the second part of my interview with Faith tomorrow, covering MySpace’s mobile revenue and data efforts. 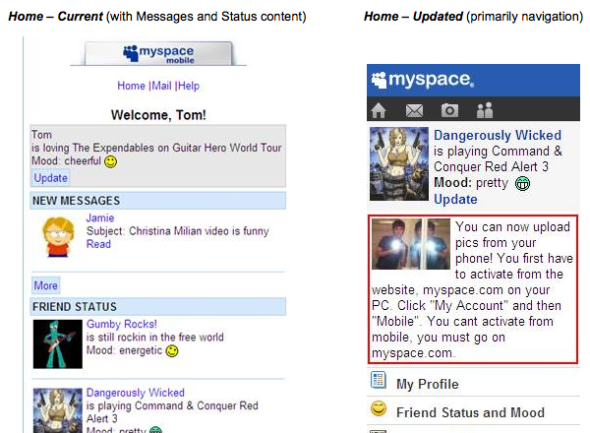 VentureBeat: What’s the story behind the growth? Is this a result of the operator (the mobile carrier) deals you’ve been working on, where MySpace applications get special prominence? Is this because of your localization strategy, where you build specific versions of the site tailored to the interest of users in particular countries or regions? Or is this viral growth?

John Faith: It’s feedback we get from carriers. There is definitely an international interest in MySpace, and we have a unique product. There’s an interest in MySpace based on what the MySpace culture is. We’re about self expression and discovery. We have partners coming to us not just because they like they like MySpace Mobile, but they like what MySpace as a company brings to the table.

VB: Do you have an update on the number of operator deals you’ve got now? The last publicized number was around 30.

John Faith: We’ve had a couple more come online since we released that figure. At this time we are very focused on our partnerships with applications and handset manufacturers, but operators are still an important part of the discovery of the mobile social Web. With the proliferation of application storefronts such as iPhone, RIM and Android – that’s where we’ve been focusing our attention.

VB: You’ve also announced that MySpace is the first social network to support every major smartphone platform: iPhone, Android, RIM, Sidekick, and most recently Palm and Nokia. So that seems pretty important to you. Let’s talk in more detail about the operators. What about regional differences in partner feedback are there. Are you being approached by operators? Do they come to you and say that they need to have MySpace on-deck (where the app is featured in a phone’s interface)?

John Faith: Yes, absolutely. We get approached by both operators and handset makers who want to have relationship with MySpace, and we want to work with them as well. From an operator’s perspective we are going to drive data usage and usage by millions of MySpace users. So MySpace as a brand and an experience that is easily accessible from a device is very compelling to people who want that on the phone.

VB: What kind of operator feedback have you gotten? In the US, you are on the deck of every operator. What kind of feedback do you get in Europe, for example?

John Faith: We work with every big carrier in Europe. Vodafone, Telefonica, O2 – we’ve got a relationship with all these guys. We continue to look for ways to integrate MySpace beyond an on-deck experience and broaden our reach.

John Faith: Yes. We work in Japan, in China, Australia, Korea. Our MySpace Mobile Web experience is localized for these countries. We take our localization one step beyond translating the site in different regions like China and Japan. Japan is an advanced mobile society. China is a society where hardly anybody accesses the mobile internet and where they leapfrog straight to an integrated experience on a mobile device. These are two examples of mobile usage experience that we need to take into account when localizing our MySpace Mobile for those countries.

VB: What else do you deal with in terms of localization?

John Faith: We also deal with different licensing agreements and rights. Let’s take music for example: In the US you might have a client radio and download tracks of 30 seconds; in Japan they can actually stream music to the users and that makes for a very rich experience. We look at things like that from a global perspective and think about how we can emulate these experiences to other markets.

VB: There are countries like India and South Africa where people mainly access the mobile Web. Is there any correlation between people being familiar with MySpace on the Internet and then going to the mobile version?

John Faith: That correlation is certainly very strong in countries like these. However, certainly in the next year or two the opportunities for growth are in countries where users don’t use a PC, where users go straight to mobile devices to access their network. When you look at growth in EMEA [Europe, the Middle East, and Africa], in India, in certain Asian countries – that’s an area where we need to create an experience which is more robust than the one we’ve got today. Alluding to what I’ve been saying before on how we are different and unique: It is about getting music and other content, about getting connected with celebrities out there, about the ability to express yourself.

VB: How much localization of content is there ? Do you cooperate with Indian popstars in India? With Japanese popstars in Japan?

John Faith: Absolutely. Currently we do that across the board. We have local marketing and sales teams that work with local celebrities, musicians, etc to make the site more compelling for our users.

VB: Does this statement relate to mobile, too?

John Faith: This could be implemented in mobile pretty soon. We recognise that there’s a thirst for mobile content like that which is socially relevant for you. This is coming very, very soon.

VB: What’s success to you in the next 12 months?

John Faith: We’ve had quadruple growth in the past 12-18 months. By now we are hitting about 20M unique users on MySpace mobile properties. Success for me is to continue that. But continue it in such a fashion that we create a better experience for users, and a better platform for advertising. In terms of growth we project that within 18-24 months we will have 50 percent of all MySpace users coming from a mobile device. That’s based on the current trend, if we keep the growth rates that we have.