During the second day of Facebook’s F8 developer conference, Oculus demonstrated what appears to be a future version of its Rift VR headset, internally called “Half-Dome.” While preserving the form factor and weight of the current Rift, the fully functional Half-Dome prototype includes several major hardware innovations designed to increase visual immersion and comfort. 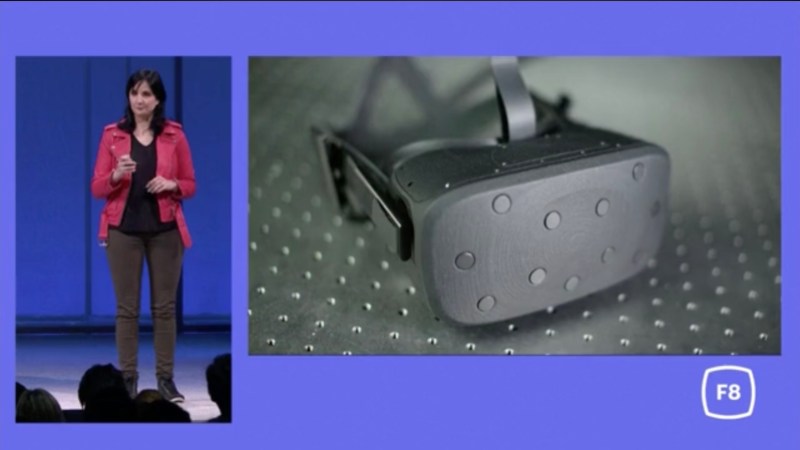 The first and most amazing technology is Varifocal, a mechanical system that actually moves the screens within the headset depending on what you’re looking at, mimicking your eyes’ ability to focus on nearby objects. Oculus’ Maria Fernandez Guajardo noted that until now, the VR industry has had to place objects at a minimum two-meter distance to prevent users from having eye-focusing issues; Varifocal solves this, enabling you to read a note or examine an object in your hands. The feature uses an optimized mechanical design with no noticeable noise or vibrations. 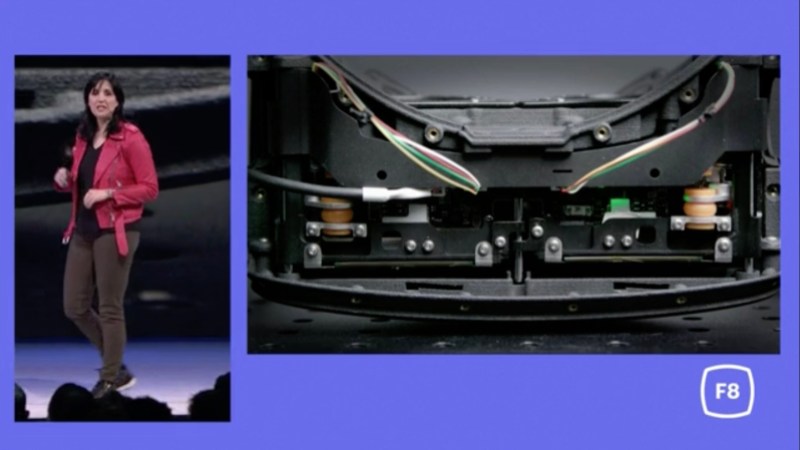 Above: Varifocal moving screens inside of Half-Dome.

Another tweak is an enhancement to the standard field of view offered by traditional VR headsets, which is around 100 degrees compared with the average person’s 210-220-degree real world field of view. Half-Dome has a 140-degree field of view, a nice step up that increases your peripheral vision, enabling you to see — though not focus on — objects at the edges of your head. Oculus also suggested that improvements in display resolution would naturally follow due to the evolution of panel technologies.

Alongside the new hardware, Oculus also showed off software realism improvements for everything from hands to avatar face and body rendering, as well as tricks to reproduce real world 3D environments in VR. Since the first thing most players see in VR is their hands, Oculus is using a new system of “deep marker labeling” to pinpoint joint points on hands, track them accurately using 2D cameras, then represent them convincingly in 3D using AI solutions. 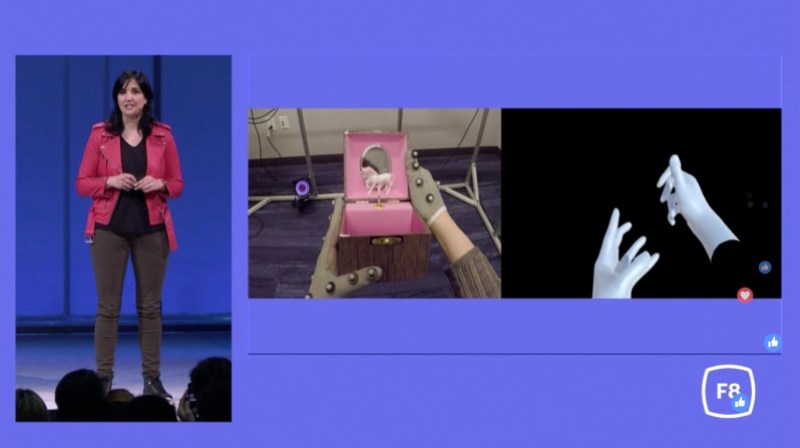 “The aim is to turn these marker positions into labeled hand poses that we will use to train our models,” said Guajardo, “but labeling hands is particularly hard for complex interactions.” Regardless, demonstrations showed individual fingers moving smoothly and hands manipulating a music box, all convincingly. Other demos showed head and mouth tracking that enabled photorealistic avatar head motions for person-to-person communications, including reasonably lip-synched speech, and the evolution of avatar bodies into increasingly complex forms. Facebook CTO Mike Schroepfer said that the company is working on projects “to bring all of the body into VR.” 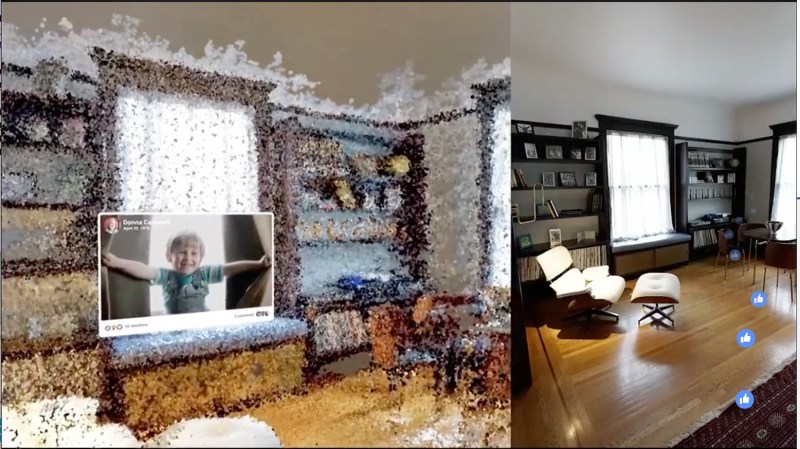 Environmental reconstruction is another big area of Facebook and Oculus development. On day one of F8, the companies showed off software that stitches photos and videos together into “point cloud” reconstructions of rooms. This software works with whatever existing reference images or videos you have of a space, but the VR-explorable product is deliberately hazy, like a moving 3D pointillist painting.

Oculus also showed a more sophisticated second system that uses a burst of stereoscopic images to create a photorealistic panorama in 3D — one that can be enjoyed in VR. This system uses image pairs to gather depth information, blending them together to create super-detailed 3D locations. Guajardo suggested that users’ “most evocative places” are their homes, parents’ homes, and favorite vacation spots, all of which can be recreated with this software without the need for professional equipment or artistic talent. 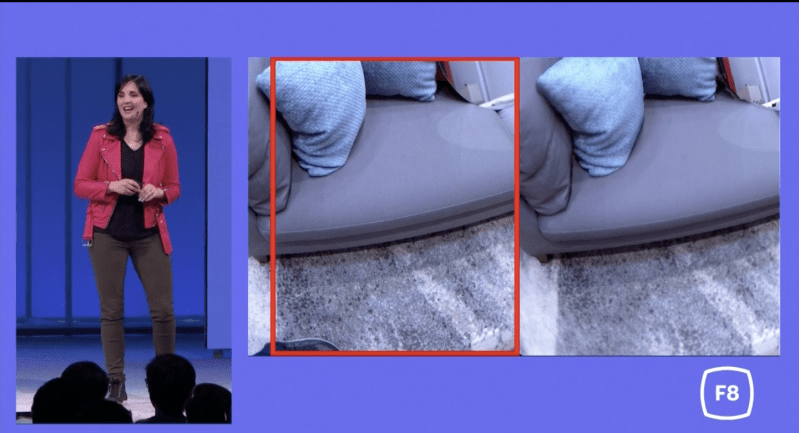 A demo of the second system showed a real room in a home next to a virtual 3D reconstruction. The real and VR spaces looked almost identical — so similar that you could only tell the difference in fine texture details, and the subtle presence of the videographer’s shoe in the original. Mirror reflections and other elements of the original scene were preserved. 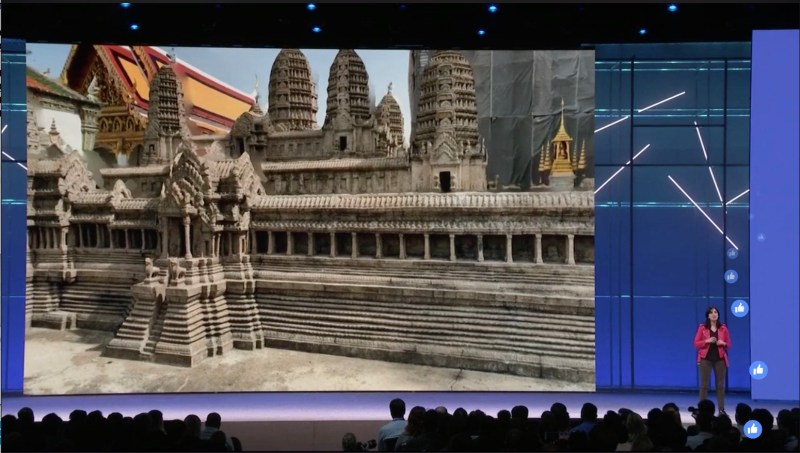 Schroepfer said that putting all of the innovations together demonstrates why Facebook is so excited about VR, and why it will become the only “way people will want to connect over long distances.” No dates were given for the release of the new software innovations or the Half-Dome successor to the Rift.