OneSpot, a news aggregator reminiscent of Blogrunner, Sphere and other media widgets that pull in news from around the web, is launching today with two high-profile pilot clients, The Wall Street Journal and The Washington Post. Each of which will run a widget containing story headlines provided by OneSpot’s algorithm. 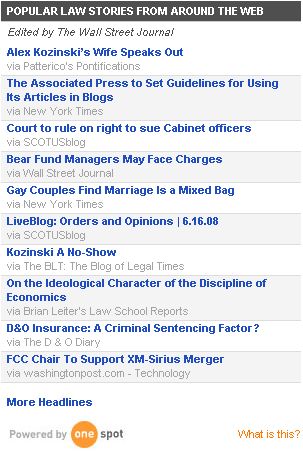 This launch is the latest move in a molasses-like battle between traditional media websites and independent news portals like Google News and Techmeme to become the news homepage of surfers. The OneSpot widget helps newspapers offer content from other sources — a strategy that most have been loath to adopt, following a hundred years of zero-sum, mine-or-theirs battling for readers.

That attitude is evidenced by the way the two papers are rolling out OneSpot: In very small, risk-free implementations. The WashPo is using The Root, a news site it owns that caters to black Americans with an interest in genealogy. The WSJ is implementing the widget on its own site, but only on its law blog. Clearly, these newspapers are still most interested in keeping a self-confined ecosystem that readers never leave.

By contrast, one of the more forward-looking newspaper companies, The New York Times Co., is light-years ahead. Last year, the company launched BlogRunner, which it owns, across the entire technology section of its site. Another paper, the LA Times, recently invested in social news site Mixx.

OneSpot is likely banking on convincing its clients, which include other, unnamed companies, that the NYT and LAT have made the correct bet. While dozens of sites have launched to independently aggregate news, most, with some notable exceptions like Digg and Techmeme, have failed to get traction. By contrast, there are only a few companies that are attempting to cater to other media sites, although there are recommendation tools like Aggregate Knowledge that newspapers most often use to pull content from within their own site — in effect, perpetuating the closed system newspapers prefer.

Matt Cohen, OneSpot’s founder, thinks that more in-site aggregators will appear — and that the competition will be a good thing for his company’s future. Media sites will ease their attitudes toward outside content once they see more traffic coming in from aggregators on other sites, he says.

In the meantime, he claims that retail store sites may help prop up his business, because they can see the use in having a content widget. “They market to millions of people but they don’t see themselves as content creators,” he says, noting that having links to outside content can help retailers fill out their sites, and keep clients coming back.

OneSpot has raised about $1 million in seed funding from two angel investors. The company is based in Austin, Texas.