Flat World Knowledge, publisher of free, open-source online college textbooks, says it has expanded its customer-base exponentially in the last year from 1,000 students at 30 universities to 40,000 at 400 universities headed into this fall — its busiest time of year. VentureBeat last reported on the company in March when it raised $8 million in a first round of funding — since then it appears it has only gained momentum.

With several startups cropping up around the textbook business, including Chegg and BookRenter.com, Flat World distinguishes itself as the only open-source provider of online texts that offers customer service and professionally-designed and distributed materials. Company co-founder Eric Frank mentioned that several nonprofits and individual universities have pioneered similar products, but that they aren’t formatted to as high a standard. 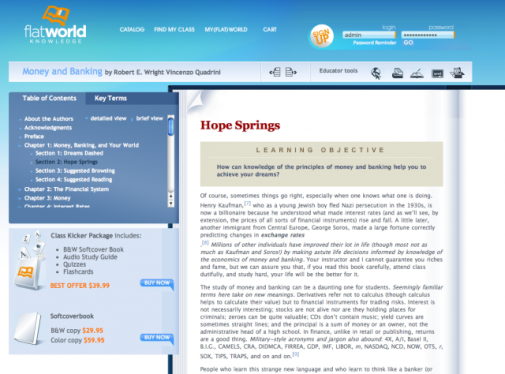 And it’s true, Flat World does give its customers an impressive range of options. The books it provides for free are written by high-caliber authors and contain the same quality of material as their hard-bound cousins. It also gives faculty members the option to customize books for their courses. Oftentimes, professors need to give students complex instructions about which chapters to read — maybe they are out of order, maybe some need to be skipped. With Flat World, instructors can order books mashed up into a format of their choosing to better match their syllabi. Not only that, but students have the option to read these books via their computer screens, printable PDFs, e-readers and even their smartphones, Frank says.

The company makes money via sales of soft-cover textbooks and audiobooks ordered by students. Apparently, the company wasn’t certain that sales would continue to increase as it expanded its user base, but Frank says that all of the students currently using the service have been very eager to buy the books it sells — mainly because the prices are still much lower (up to 75 percent less) than new textbooks being sold in their traditional form either at campus bookstores or online.

The problem presented by skyrocketing textbook prices has been widely acknowledged. Not only are students turning to book renting and used book channels to meet their needs — many of them are opting not to buy the books at all, putting professors in a hard spot and cutting into their ability to teach. Frank says students have taken quickly to the concept of open-source texts. While their professors have been slower to convert, Frank says many of them feel like they have little choice in the matter — with prices remaining so high, they need to start looking at viable alternatives. Flat World seeks to make this transition as easy as possible, with a developed customer support staff and simple interface.

It will be interesting to see how the company performs this fall and throughout the 2009-2010 academic year. Textbook rental service Chegg has received a lot of hype, mostly due to impressive funding and the backing of Kleiner Perkins Caufield & Byers. It makes sense that book rental would attract a wider audience initially, as a simpler, less disruptive concept. But with Flat World lowering prices even more and giving customers the option to mix and match materials to fit their curricula, it seems like only a matter of time before open-source textbooks overtake the market.

Flat World’s investors include Valhalla Partners, Greenhill SAVP and High Peaks Venture Partners, as well as several angel investors. Frank says the $8 million brought in earlier this year will be enough to fuel the company through fall 2010.