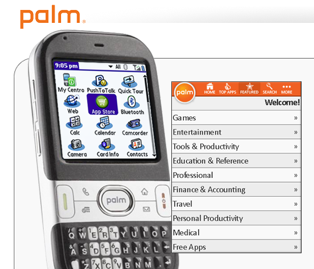 When Apple launched the App Store this past summer it became, if nothing else, the thought leader in mobile innovation. Now everyone’s playing follow the leader. BlackBerry, Symbian, Microsoft and Google Android have all built, announced or are at work on their own “app stores.” And today, another big name joins them: Palm.

On the plus side, Palm’s new app store is live right now. That puts it ahead of BlackBerry, Symbian and Microsoft’s native app stores. Palm says there are over 5,000 apps already, which while not as many as the 10,000+ in the iPhone App Store, is more than the roughly 500 apps the Android Market has after being live for about two months.

Of the Palm app store’s 5,000 apps, over 1,000 are free. There are also already apps available that are bound to be popular such as a Facebook app and games like Pac-man and Tetris. And the store will work on over 25 Palm devices. Not bad.

But now for the bad news. First of all, the branding is awful. From the documentation sent to me I can’t figure out what on Earth Palm’s app store is actually called. Sometimes they refer to it as the “Palm App Store” other times it’s called the “Software Store.” More worrisome may be that it’s not actually built by Palm, but instead is powered by the mobile platform company PocketGear.

But maybe that’s not such a bad idea. Rather than build a new app store from scatch and hope developers find enough free time when they’re not developing iPhone apps (and maybe Google Android apps) to develop for its platform too, Palm’s use of PocketGear’s third-party app store allows it to have a fairly robust platform at launch — one that can also lay on top of Windows Mobile installed on Palm devices.