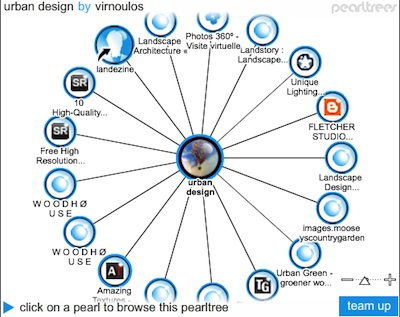 With its slick visual interface for bookmarking content, Pearltrees is unique enough that I’ve been both impressed and slightly skeptical that a mass audience will actually use it. But it looks like the site has found plenty of users.

The French startup just announced that it crossed two big milestones in March: It has more than 100,000 users curating links, and it received more than 10 million pageviews. Not only does that show the concept is resonating, but it also suggests Pearltrees could reach the scale where it can build a real business around advertising or by offering premium accounts for publishers.

When you share links on Pearltrees, they show up as little circles called Pearls. (The site can also automatically add links that you share on Twitter.) You then organize those Pearls into larger groups of related content called, yes, Pearltrees. You can use Pearltrees as a way to save and organize content just for yourself, but all of the links are shared publicly, so users can also find others with similar interests, check out their content, and even add Pearls to their own Pearltrees.

Pearltrees launched in December 2009, and it recently enhanced the social aspect with a new teams feature that lets groups of people create Pearltrees collaboratively. Oliver Starr, the company’s chief US evangelist, said that adding social features has led to “a real acceleration in the growth and development of our community.”