Pinterest is rolling out a new feature called Explore that uses machine learning to surface trending ideas on the visual idea search and bookmarking service from select tastemakers and publishers. It will display not only popular pins, but also native videos, which the company has been actively pushing in the past year.

Explore is rolling out starting this week and will be available on Pinterest’s website, as well as on its iOS and Android apps. It complements the current Home feed, where 150 million monthly active users currently discover pins shared by the people, boards, and interests they follow. The new feature is intended to introduce “new ideas, videos, and tastemakers” that perhaps a user normally wouldn’t have found.

Technically, Explore already existed, having launched internationally in April, but it only featured categories. This time around it’s more dynamic, trending, and personalized to each user.

Pinterest divides its Explore section into three parts. Today’s picks is a personalized recommendation list that are based on daily search trends; so Tuesday might display food and drink pins, while Fridays would have weekend projects and Sundays would be all about shopping. The second area is Topics, which uses machine learning to pop up ideas, searches, and pinners from across more than 30 topics, based on your current interests. 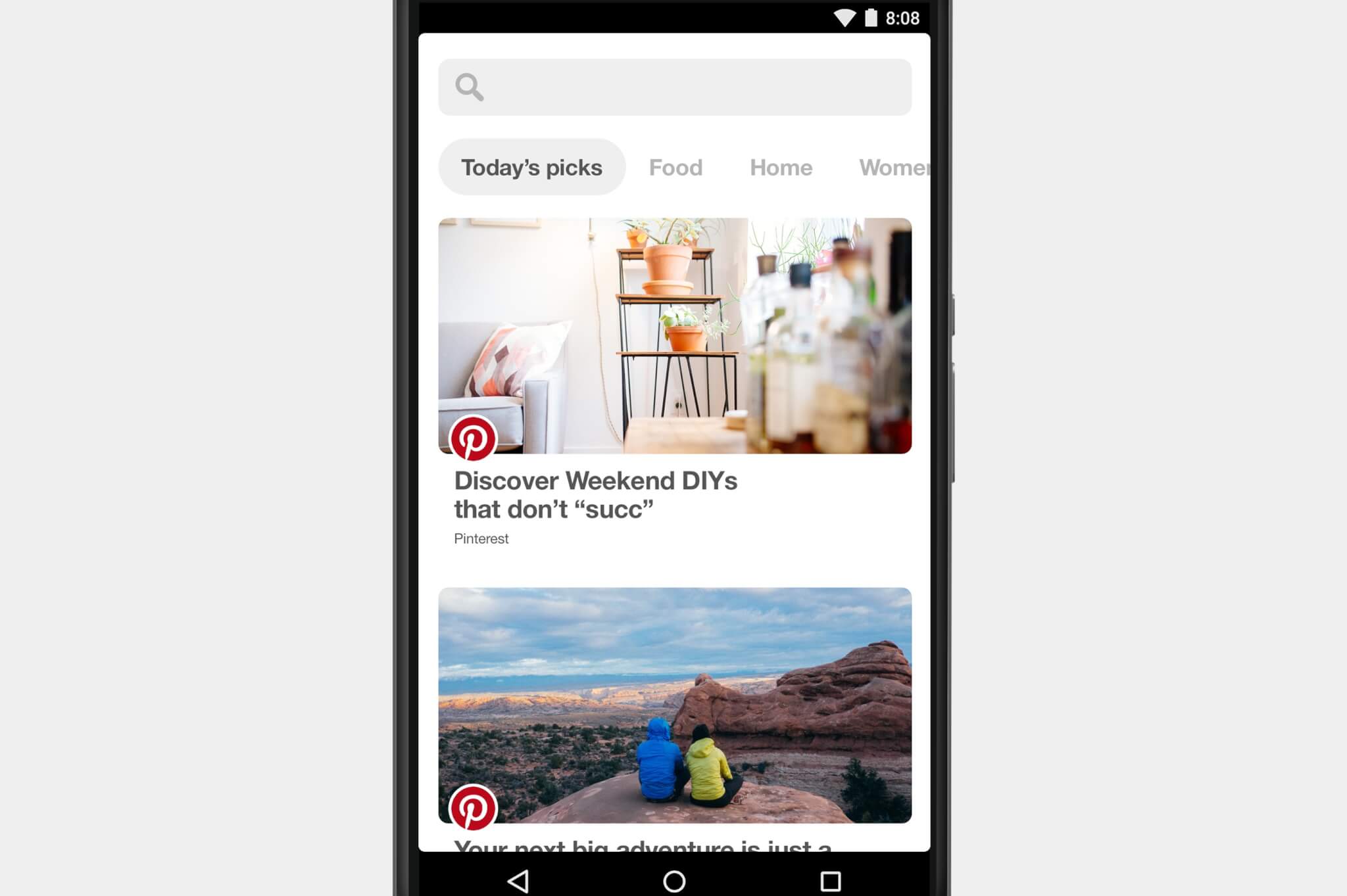 Lastly, native videos are incorporated in Explore, providing a daily video collection designed to provide quick tips for learning new things, such as styling a tie for the holidays. It’s worth noting that while the content in this space will be populated by tastemakers, the videos will also include advertisements that will play automatically, featuring marketing messages from American Express, Macy’s, Sony Pictures, and others.

The inclusion of native video is a culmination of testing Pinterest has done over the past several months. In August, it announced it was working on a native video player that would enable users, brands, and advertisers to upload video right to its site without having the content streamed from YouTube or another third-party provider. Pinterest claimed that its improvement in video discovery would start to roll out “in the next few months,” so the use of machine learning and Pinterest Explore is a logical place for its inclusion.

One way of thinking about Pinterest Explore is that it’s like Facebook and Twitter’s trending topics offering. More than 75 billion pins have been saved on the site, giving Pinterest plenty of data from which to discern recommendations using machine learning. It’s this technology which has spurred the company’s user growth. As my colleague Jordan Novet wrote recently:

Pinterest often already knows a lot about something that you’ve just pinned, partly because it knows that some other people have pinned it right alongside one or more other pins. That’s called ‘co-occurrence,’ and it’s a powerful signal that pins are related. But sometimes — say, in another country where many people speak a less-popular language — a user pins something that Pinterest has never seen even once before, and Pinterest can’t do much with the text associated with the pin. That’s where deep learning can make a big contribution. Similarities in the content of the pin can give Pinterest a clue as to what it might be.

So it’s unlikely that the company will encounter similar issues that Facebook ran into when it first leveraged human editors for its trending topics before switching to machines. But is that really an apples-to-apples comparison? People come to both sites for different compelling reasons: Pinterest for creative ideas and Facebook for communication and social engagement.

The addition of Explore fuels other opportunities for Pinterest to monetize itself, providing advertisers with a space where promoted pins and other sponsored content could appear … if the price is right.

Since it’s a learning product, the very first time you visit the new section, it’ll start out by displaying ideas based on your Pinterest usage. These are merely suggestions, and the company gives you the liberty to customize which topics you’ll see. From then on, Pinterest will tailor itself to be more personalized to things it thinks might interest you the most.