Updated with information from Hi5 on its gaming effort. 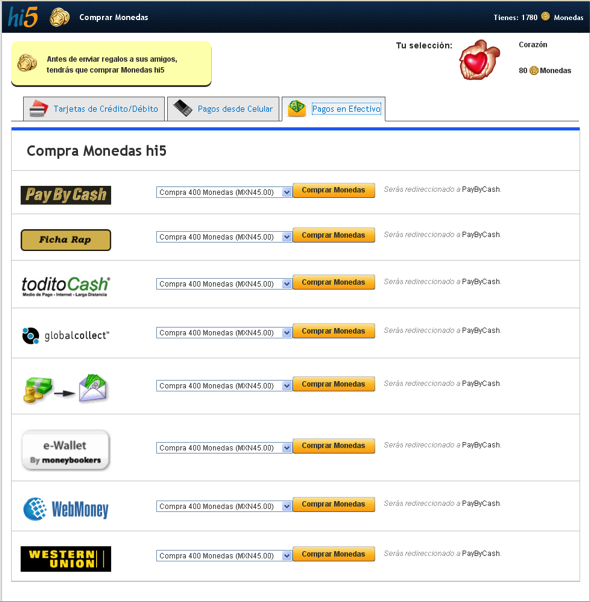 Social network Hi5 is continuing its foray into the business of virtual gaming today by introducing two new ways for users to pay it real money for its “Coins” virtual currency. The services, offered by gaming payment company PlaySpan, include PayByCash, which lets you buy Coins using cash or check, as well as the Ultimate Gaming Card, a prepaid card so parents can buy a set amount of Coins for their kids.

Given that Hi5 is popular in many countries where people may not either have a lot of money nor access to credit cards — portions of Latin America, Eastern Europe, Asia, and assorted countries elsewhere, PlaySpan’s service could help the social network make some more money. Especially as Hi5 continues to focus on more gaming features. It introduced a casual gaming section of the site in February, although Coins don’t seem to be integrated into the games yet — at least not the ones that I played.

San Francisco-based Hi5 kicked off its virtual goods business with the introduction of virtual gifts last December. It introduced Coins at the same time as a way for users to buy these gifts. Users have already been able to pay for Coins using PayPal and Clickandbuy.com web payment services, Paymo and Mobill Cash mobile payment services, or earn Coins through completing advertising offers. PlaySpan’s cash-transaction services are now available to Hi5’s 62 million users around the world.

The virtual goods effort is now in full gear for Hi5. The company laid off half of its 100 person staff a few weeks ago, refocusing away from selling advertising. At the same time, the company announced a deal with online in-game advertising network Mochi Media, where Mochi will distribute thousands of games from third party developers into hi5. As part of the deal, Mochi will run its ads within the site while Hi5 will use Coins as the currency for all of the games.

So the social network turned social gaming company could be partnering its way into profitability — the one with Mochi means Hi5 users have more games to play, the one with PlaySpan means they have more ways to pay to play. And, while PlaySpan is already used on a variety of gaming sites, the Hi5 partnership in turns gives it more access to many emerging markets.

The question is how much virtual goods might be worth to Hi5. The company said earlier this year that it expects to make $25 million, half from advertising and half from virtual goods. As it ramps up partnership deals, it — and every other social network– is most likely looking east, to the web companies in China making billions on virtual goods.

[Update from Hi5: “We’re not disclosing details on revenue performance from these new sources yet, but we’ve been pleased by the quick adoption by our users. We just launched hi5 Games in February and are already over 1.5 million game plays/day, and several million monthly uniques to our game channel.  We also just launched our first premium service, the hi5 Supporter Program (which you can find if you click on the “Sponsored by” button above the upper right ad unit on our home page), which lets users enjoy the site ad-free and designates supporters with a special badge on their profile picture.”

The company also says that layoffs amounted to less than 40 percent of its total staff.]