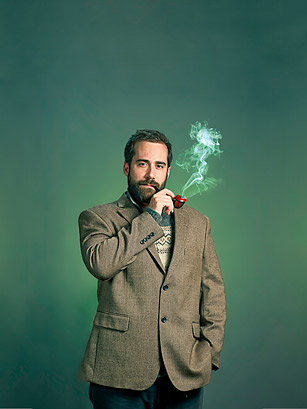 It’s hard to deny that community news sharing site Reddit hasn’t had a positive impact on the world. It’s user base is responsible for donating tons of money to good causes. Its employees led the crusade against the intrusive SOPA/PIPA legislation by shutting down for an entire day to live blog congressional protest. Reddit even makes the holidays more merry by running the largest Secret Santa gift giving event in the world.

So, who better to represent all that good than Reddit General Manager Erik Martin (a.k.a. Hueypriest), who was recently nominated for Time Magazine’s 100 most influential people. The magazine allows readers to vote on the top 100 nominations, but a team of editors selects the final list.

Martin is currently at the top of Time’s reader poll, with a ridiculous lead of over 105,000 votes at the time of publication. Part of that might have something to do with the site’s co-founder asking Reddit users to join them in voting, and conveniently submitting a direct link to Martin’s nomination page. The site’s user base is very familiar with the concept of judging submissions, and is responsible for bringing in a monstrous two billion page views per month.

“The last place I thought I would find a picture of him smoking a pipe would be on the Time’s man of the year listing,” wrote former Reddit employee Chris Slowe (a.k.a. KeyserSosa) in a comment thread about Martin’s nomination.

More recently, Martin asked the Reddit community to start registering as bone marrow donors in a small effort to help newly hired community manager David A. Croach — as well as others — fight leukemia. In a blog post, Martin writes:

…the doctors say his best chance is for a perfect-match bone marrow transplant. So, that’s what we at reddit are going to help find for him, and we hope some of you join us. A bone marrow transplant’s success relies heavily on the host’s and donor’s immune markers being similar enough that the new bone marrow doesn’t attack its host. This is where we all come in: there hasn’t yet been a good enough match for DAC’s transplant, so we need to get as many people screened as possible to find a good match. In the process, you can register to be on the national bone marrow registry to potentially help out others in this situation. Don’t worry, donation is painless these days.

Despite all of Martin’s effort with the site, handful of Reddit users didn’t want to justify his nomination.

“It’s really embarrassing to be sharing the same website with all of you morons shoehorning him in. You have world leaders, activists, philanthropists, global business giants, and doctors on that list,” wrote Reddit user appleseed1234 in a comment thread. Others felt Reddit users should take credit for the site’s positive impact on the world instead of the employees. Overall, less than 10 percent of people voted against Martin’s nomination, according to Time’s reader poll results.

The voting period for Time’s 100 most influential people poll doesn’t end until April 6. Theoretically, the results could change quite a bit between now and then.

Photo of Erik Martin via Time