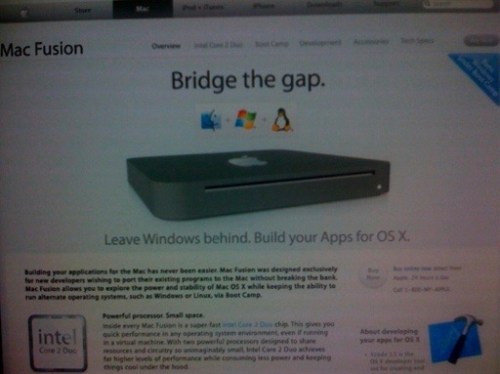 Given all the hype surrounding the 3G iPhone, it’s easy to forget that there will likely be some other products released at tomorrow’s WWDC event. It’s also easy to forget that that WWDC stands for Worldwide Developers Conference — it is first and foremost about developers. With that in mind, perhaps this new rumor shouldn’t be so surprising.

Apple may launch a new Mac called the Mac Fusion aimed specifically at the developer crowd, a tipster tells TUAW. This tipster was also nice enough to throw in some pictures — which look real enough.

If it’s real, this Mac Fusion appears to be a box that is slightly smaller than the current Mac Mini computer, roughly the size of an Apple TV. It will apparently let developers work with either the OS X, Windows or Linux operating systems via Boot Camp, Apple’s software that allows users to install multiple OSes on their systems. The pictures also show it containing an Intel Core 2 Duo chip, the chip found in other Macs have as well.

Find a couple more pictures over at TUAW.

Follow our coverage of the WWDC tomorrow here and in our FriendFeed room.