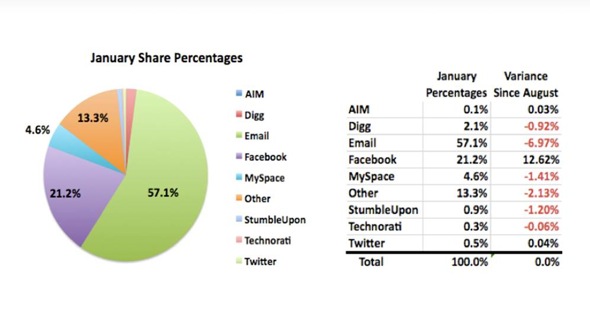 Here comes even more data showing that Facebook’s redesign is working. ShareThis — which makes a widget for sharing news stories via social networks, social news sites, and even good, old-fashioned email — just revealed that among ShareThis users, Facebook sharing is on the rise while virtually every other channel is down.

Sharing via email still dominated in January, accounting for 57.1 percent of stories on ShareThis. But that’s down 6.9 percent since August, while Facebook sharing has increased 12.6 percent and now makes up 21.2 percent of the total. Meanwhile, social news site Digg is also down 9.2 percent, and Twitter increased 0.4 percent. (Twitter only makes up 0.5 percent of sharing, which may be another reason to wonder why Twitter is getting so much press coverage.) [Update: ShareThis says it provided the wrong percentage on Digg, which only fell 0.92 percent. The chart above has been corrected.]

These numbers are important because all this information sharing — emphasized in the redesign Facebook rolled out last fall — seems to be fueling Facebook’s traffic growth, as well as increasing the time Facebook users spend online. And that’s despite user protests, as well as concerns here on VentureBeat that the redesign was aimed at Silicon Valley, not the rest of the world.

Of course, we’re just looking at one service here, but it’s a service that shared 2 billion pageviews worth of articles in January. And it’s important to note that ShareThis users previously preferred other types of sharing and have only switched to Facebook over time. That means the data probably doesn’t just reflect a longstanding bias towards Facebook, and instead might actually indicate a broader trend.