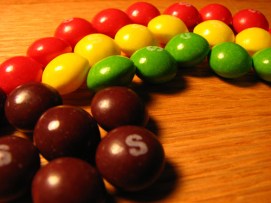 In what is either a sign of Twitter’s ongoing transition to the mainstream or of a candy company’s epic laziness, Skittles.com is now simply a Twitter Search result page for the candy.

Yes, paste Skittles.com into your web browser and, after you fill in your birthday (because you know, Twitter can be naughty), you are greeted by a Twitter Search result page with the query “skittles” already filled in and displaying results. There is also a Skittles menu overlay in the upper left hand corner of the screen just in case you want to actually learn something about the product, rather just what people on Twitter are saying about it. (And, as perhaps further proof of Skittles’ inept web page design ability, if you’re on a smaller monitor, the overlay blocks most of the content.)

Naturally, people are already spamming the hell out of this. One tweet being repeated over and over again unfortunately uses a racial slur. As such, I suspect this little experiment will end rather soon for Skittles. I’m a firm believer in the power of Twitter Search as perhaps the most compelling thing about the service, but the candy’s use of the feature just feels gimmicky. It would have been better as a part of the site, not as the homepage. My advice: I know times are tough, but hire a web designer.

Update: The racial slurs have given way to crude, yet humorous (in a juvenile way) “j**z the rainbow” saying repeated over and over again. Skittles’ executives (if awake) are probably not too happy right now with their new slogan.