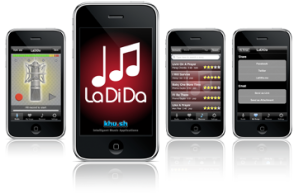 Khush created the app Songify, which turns spoken works into songs. It also developed Ladida, a “reverse karaoke” app that composes music on-the-fly as you speak or rap into your phone. Ladida has been downloaded more than 5 million times.

More than 200 million songs have been shared on the Smule Sonic Network, a social community built around music created with the company’s apps such as Magic Piano, I Am T-Pain and Ocarina. The two companies together have nearly 30 million users, and Smith says this is a 500 percent increase from one year ago. The tie-up will allow Smule to scale up its plans for the Sonic Network and will allow the Khush family of apps to take advantage of the existing community and infrastructure.

Both companies were founded by university music professors. Smule co-founder Dr. Ge Wang is a computer music professor at Stanford, and Dr. Parag Chordia, the co-founder and chief technical officer of Khush, is a professor of computer music at Georgia Tech, where he serves as the director of the Georgia Tech Music Intelligence Lab. Smule is based in Menlo Park and Khush is headquartered in Atlanta. Khush’s six-person team will remain in Georgia.

Smith said the company has “a lot in the hopper” and will launch the first joint product on Dec. 8. “It’s kind of an insane product that I don’t think anyone would expect from the company,” he said. “This will be the first product that is innovative not only in a aural sense, but also in a visual sense. It’s kind of new terrain for Smule and Khush.” Expect a new product launch from Smule the following week, and Smith said the company will be launching yet another new product in January.

Smule raised $12 million in October. Chief Smith told VentureBeat that the money would be used to double the size of the team and to make acquisitions. “If we saw the opportunity to accelerate inorganically, we would pursue that as well,” Smith said. The purchase of Khush is the first acquisition Smule has made since raising that round.
[youtube http://www.youtube.com/watch?v=B9AUad-HElE?rel=0&hd=1]