Updated with commentary from RockYou

It’s a tale of two social network developer platforms. Hi5, a site popular in some Spanish-speaking Latin American countries and other regions around the world, launched its platform at the beginning of this month — and the third parties that have applications on the site are reporting impressive growth.

Leading widget company RockYou, for example, says its “SuperFive” application has already been installed two million times in the last couple of weeks. Why? Hi5 specifically offers ways for users to contact each other through third-party applications.
Meanwhile, applications on market leader MySpace‘s platform have been seeing insignificant growth since it launched in mid-March — because MySpace has yet to introduce effective ways for applications to contact users. However, one top developer tells us that MySpace will soon be offering notifications, email messages, and other so-called “viral channels” already available on Hi5.

So MySpace may soon become the hot spot for applications that third parties have long hoped for. Meanwhile, Hi5 may have done a better job of addressing the spam problem.

To get an idea of what I mean by “viral growth,” here’s a closer look at RockYou’s “SuperFive” application, which lets users send action messages like a “hug,” “tickle,” etc. to Hi5 friends. If this sounds familiar, it’s because 1) Hi5 already has a feature called “five” which is basically a copy of Facebook’s “poke” feature and 2) RockYou and competitors already offer Facebook applications where you can hug/tickle/poke your Facebook friends

I’ve been hearing that this messaging feature is actually useful for companies that want branded contact with users, like being able to “throw a Coke” at a friend (I made that example up, but you get my drift). Many developers have made good money from selling branded pokes/hugs/tickles. 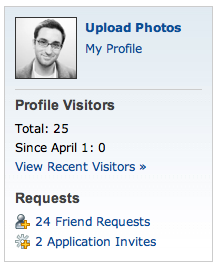 Update: While this sort of application may seem silly to me, and to many VentureBeat readers, RockYou points out that many, many users find it meaningful — and who are we to judge that? RockYou also makes another interesting point.

Facebook, the first social network to offer a developer platform, has spent much of the past year shutting down ways that applications spam users — and trying to placate users who don’t want to use applications.

Hi5 has instead come out with a new notification system specifically for applications (see the bottom of the screenshot). This means that there is little risk of users feeling spammed by applications messages, because they can just ignore invites, etc. if they don’t want to deal with it.

RockYou says it has been working hard with Hi5 and other social networks to make sure that its user experience is non-intrusive.

Another other story here is that Hi5 — and MySpace — allow applications built in the OpenSocial application standard to run on their platforms. OpenSocial lets a developer quickly modify an application so it can work on any site that conforms to OpenSocial’s specifications. RockYou and many other developers say that Open Social is saving them time writing code, even though each member social network requires some customization to fit its particular feature set.

It looks like Hi5 is going to stay at the center of developer attention, at least for awhile. As the San Francisco company bragged when it launched its platform, there’s only a 25 percent overlap between its 35 million monthly active worldwide users, and users on rival social networks: The average Hi5 user isn’t on MySpace or Facebook. This means that it is especially important for developers to build applications in languages besides English, top application developer Blake Commagere tells me. Hi5 even offered free language translation services to the first 100 apps submitted.

While still in its early days, Hi5 may have found a good balance between growth and spam-control.