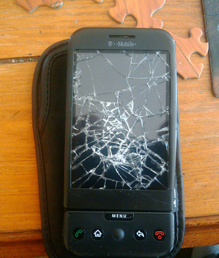 Ever since the launch of the G1, the first phone to use Google’s Android mobile operating system, key industry players and fans have been touting the platform’s “openness.” What they don’t tell you though, is that there’s a downside to openness — one that took mere hours to manifest itself in a small way in Android Market upon the launch of paid applications last week: Shady applications.

Let’s be clear: Apple has had its share of shady applications in the App Store’s brief history. But when an application like I Am Rich appeared, selling for $999 and offering users nothing except a red gem on the screen, Apple quickly removed it. But now, with the more open Android Market, guess what’s back? Yep, say hello to I Am Richer, the first true rip-off Android app. Notice, I said “first.”

Now, I Am Richer is actually a steal compared to I Am Rich, as you can grab it for the low, low price of $200. But just like its predecessor, I Am Richer does absolutely nothing except display a blue diamond image that appears on the screen. When Apple removed I Am Rich, some tried to spin it as Apple being oppressive, after all, who’s to say what art is — one’s man’s trash is another man’s treasure and all that — but what Apple really did with that move is send a message: Keep these shady applications out of our store.

That’s not to say Apple doesn’t let through a lot of absolute crap for applications in the App Store — it does. But it’s simply hard to make an argument for what purpose an application like I Am Rich serves other than either tricking people into paying $1,000 (except to serve a springboard for dozens of other apps like it). And that’s what we may just see now in the Android Market, since it seems unlikely that Google will remove this app.

And it really doesn’t have to — perhaps Android Market’s best policy is the 24-hour return policy, which effectively makes all apps try-before-you-buy. But that’s not to say Google couldn’t make an argument for removal of such an app — it potentially could. After all, Android Market has many of the same rules that Apple’s App Store does. But if Google did that, it would likely ignite a firestorm of backlash given its “open” talk in the past. So, it’ll likely stay, and with it will come more apps that make some of the App Store’s crap look downright useful.

Android Market shoppers are already annoyed. The Android app tracking site Cyrket features two reviews for the app thus far. One is clearly a joke, the other is an annoyed shopper:

This stupid glowing blue thing is a bad joke. Dev is sadly mistaken if he thinks 1 person will buy and keep. I think his wife left the review above.

Of course none of this will matter if the Android Market doesn’t start gaining more popularity. While the App Store has over 20,000 apps, the Market has only something along the lines of 1,000. Paid applications are expected to spur development as developers will finally be able to make money on the platform, but so far, not too many people are buying.

A few Android developers told NetworkWorld that their cheap apps in the Market simply aren’t selling. Some are wondering if that’s because the Market started out completely free, and now people simply are used to not paying.

Time will tell on that, but I suspect things will pick up quickly as more Android phones launch this year. And with those new phones, will come a lot more apps like I Am Richer.