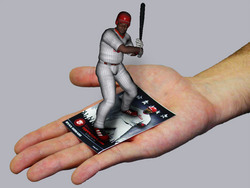 If anything needs an update in the digital age, it’s the old-fashioned baseball card. Today, the Topps Company and Total Immersion are launching a new baseball trading card that shows a 3-D image on a computer if you hold it in front of a webcam.

The technology is an application of Total Immersion’s “augmented reality,” which debuted at the DEMO conference in 2007. The technology ties together the baseball cards in the physical world with the Topps 3D Live virtual sports community online. There are 33 3-D cards altogether based on Major League Baseball players such as Ryan Howard of the Philadelphia Phillies.

The cards come with codes in every pack. Fans log into the Topps site, select the player on the code card, and then hold the card under a typical webcam. The player pops up from the card onscreen and springs to life. You can rotate the card and control the player’s actions in an on-screen game with a keystroke or two. This is the first consumer product based on Total Immersion’s technology, which has been used in theme parks with the launch of the Dark Knight movie.

Topps, founded in 1938, is owned by Michael Eisner’s Torante Company. In a statement, he said the goal is to transform Topps into a sports media company. Topps launched its Topps Town sports community site for kids in June, 2008.