Twitter said today that the U.S. government has filed a highly redacted version of the company’s draft national security transparency report, a step that shows for the first time information about data requests Twitter has gotten from the NSA and other intelligence agencies.

The court filing came in response to a lawsuit Twitter filed in October, demanding that the government let the company inform its users about national security-related data requests. That suit is still ongoing.

In the two-page document, which includes several hand-written words as well as a number of redacted phrases, Twitter wrote that “Like all companies, [we] can be compelled by court orders and other means to release user information to the government. Unless our users understand how much, how often, and what kinds of information Twitter is forced to disclose, our users cannot make informed decisions when posting their often courageous tweets. Therefore, it is vital that Twitter be transparent with its users and be able to communicate this information in a manner that is relevant, understandable, and useful.”

Twitter noted in the draft report that the U.S. government had made “quite limited” national security requests for its users’ data. Yet it noted that no technology company would have previously been allowed by law to “state truthfully that it has not received any national requests, or any of a particular kind of national security request, when none have been issued to it.”

Last week, in an unrelated case, a U.S. judge in San Jose, California ruled that the federal government could not indefinitely gag Yahoo from revealing a grand jury subpoena seeking information on subscriber accounts. 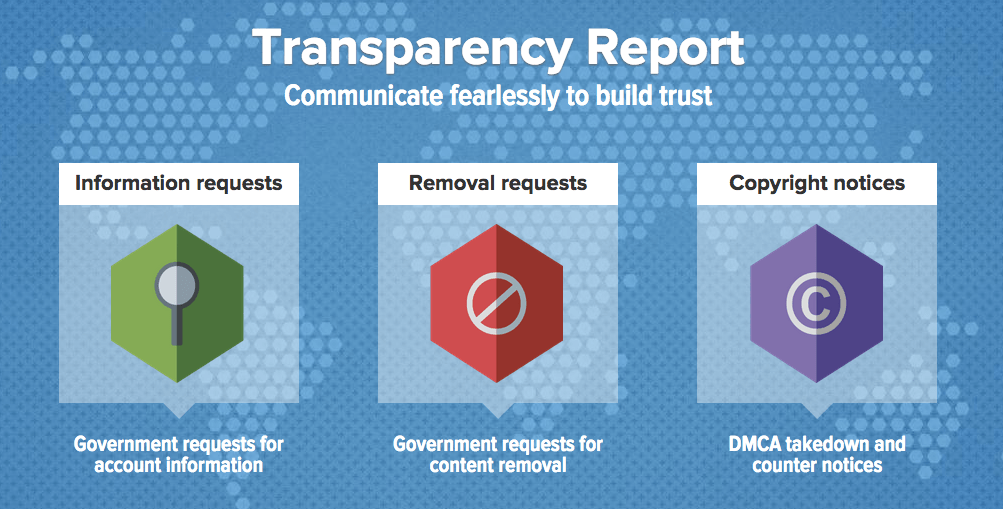 At the time Twitter filed its lawsuit, the American Civil Liberties Union applauded the company’s legal attempt to force the government to allow it to be forthcoming with users. “Twitter is doing the right thing by challenging this tangled web of secrecy rules and gag orders,” ACLU legal director Jameel Jaffer said in a statement at the time. “We hope that other technology companies will now follow Twitter’s lead. Technology companies have an obligation to protect their customers’ sensitive information against overbroad government surveillance and to be candid with their customers about how their information is being used and shared.”

The government’s redactions in the draft transparency report appeared to mask specific numbers, such as the number of national security requests. For example, the document asserts that “The number of national security requests Twitter receives has increased over time, but even during the last six months of 2013, the combined number of [National Security Letters] and [Foreign Intelligence Surveillance Act] orders that Twitter received was [redacted] of the 249 combined requests that the government would have Twitter suggest [redacted].”

Twitter goes on to note in the document that the total number of national security requests is “small,” leading it to argue that, “therefore, it is important that we be able to share our version of the surveillance story.”

Twitter today also revealed the scope of data or user account information requests it had gotten from governments around the world.

Overall, the company said, such requests had increased 40 percent since its last transparency report. Leading the way among governments demanding data from Twitter were Turkey, Russia, and the United States. Twitter said that although Turkey’s requests had increased 150 percent since the last report, it had refused to provide that country’s government with any information. It also said that the more than 100 requests from Russia — none of which it responded to with data — were the first the company had ever received.

Requests from the U.S. government had risen 29 percent since the last Twitter transparency report, it said, and its compliance rate went up 8 percent.

Twitter noted that it had received 84 percent more government and government-sanctioned demands to remove content from the microblogging service, led by Turkey (with 477 such requests), Russia (91), and Germany (43).