Analysts had expected Twitter to report 325 million monthly users, or a 1.5 percent sequential growth. Instead, Twitter grew its total user base 0 percent sequentially. Mobile monthly active users represented approximately 80 percent of the total figure, a number that has been flat since Q3 2014.

It’s not a pretty picture: 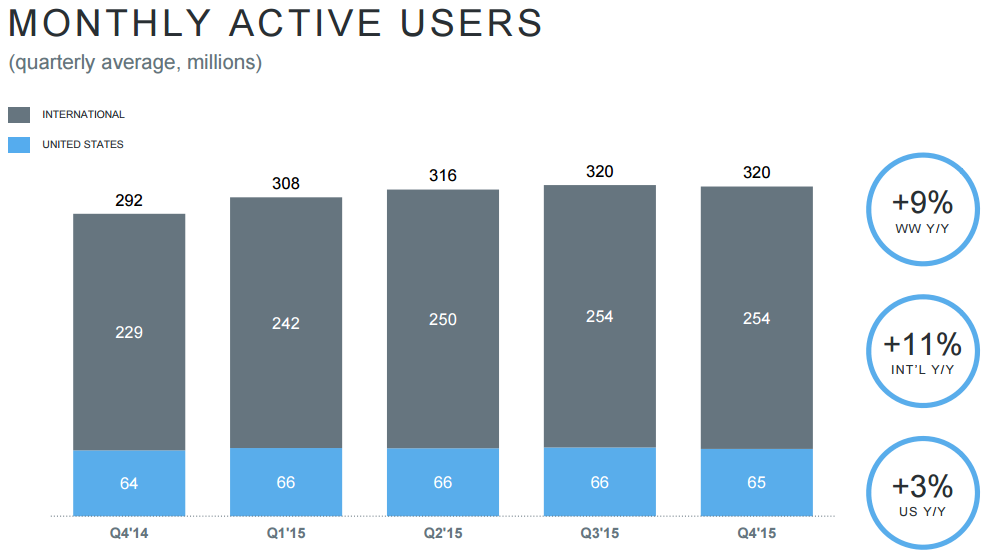 “We saw a decline in monthly active usage in Q4, but we’ve already seen January monthly actives bounce back to Q3 levels,” Twitter stated in its press release. “We’re confident that, with disciplined execution, this growth trend will continue over time.”

For the past few quarters, SMS Fast Followers contributed the majority of new monthly active users Twitter added on a sequential basis. In Q4 2015, the growth there offset the decline for the remaining user base — exactly why Twitter started including SMS Fast Followers in its earnings.

Investors have been worried about Twitter’s slowing growth for a long time, and the results today confirmed their worst fears. While the social network still has a massive user base, more users leaving than joining is always a terrible sign.

Update at 2:20 p.m. Pacific: On its earnings call, Twitter offered two explanations for the poor user numbers, though neither were particularly compelling. The first was seasonality (Q4 is typically a poor quarter for the social network in terms of user growth). The second was that Twitter sent fewer emails in Q4 asking users to come back to the service. Because daily active users were flat while monthly active users were down, Twitter argues that high-quality users are still coming back. The company is betting on big events to help it out (the Super Bowl, the Oscars, the U.S. election, and so on).

But the fact remains that Twitter is not growing users anymore. Even if the figure rebounds in Q1, it will still be an uphill battle to prove the company can reverse the overall trend.