It’s no secret that Twitter is open to acquisition offers, but a new report suggests that the social network has received expressions of interest from at least two notable tech companies — Google and Salesforce.

According to CNBC, Twitter may receive a formal bid “shortly,” with Twitter’s board keen to strike a deal. Though no actual sale is imminent, according to the report, CNBC cites a source as saying that talks are gaining momentum, and something could materialize by end of the year.

Twitter has been suffering growing pains of late, both in terms of user numbers and revenues, which has fueled speculation that an exit to a larger company would be a likely outcome. Twitter’s shares have pretty much been in perpetual freefall over the past couple of years, dropping from a $69 high in early 2014 to about $14 in May this year. At close of markets yesterday, Twitter’s shares were sitting at $18.49, but at the time of writing they’re at more than $22, a rise in excess of 20 percent on yesterday. Notably, it’s also the highest Twitter’s shares have been since January this year. 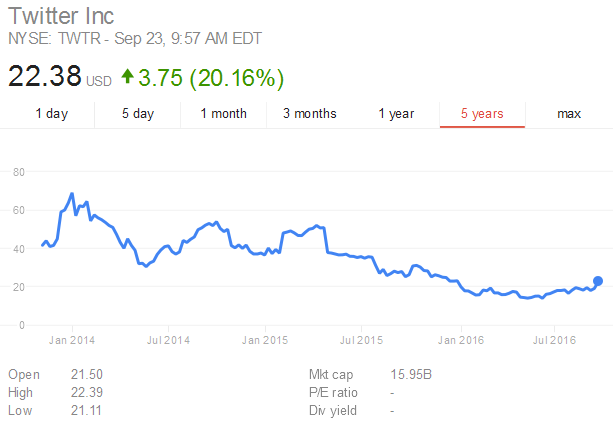 While companies such as Google and Microsoft have long been touted as potential buyers, the addition of Salesforce to the mix is interesting — it doesn’t seem like a natural fit on the surface. Why would an enterprise SaaS company wish to procure a platform synonymous with bite-sized nuggets of information and trolls? Well, Salesforce is known to have missed out on acquiring LinkedIn — which went to Microsoft — so Twitter could offer a way for Salesforce to become more active in the real-time information realm. Of course, it would have to focus any product on business use-cases. Long story short, Twitter is a tempting target due to the masses of data it holds, and this pretty much means it’s an alluring proposition for any firm that feeds on data. That said, it’s hard to imagine a world in which Twitter is owned by Salesforce.

While Twitter’s shares are gearing up to reach their highest point in 2016, Salesforce shares actually hit a six-month low after this news dropped. Make of that what you will…