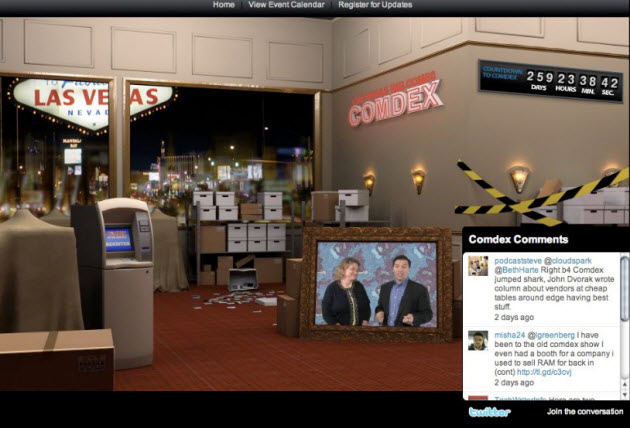 The virtual event business keeps growing as travel budgets tighten. One clear example of that is that the Comdex trade show — once the grandfather of computer trade shows — is coming back as an online-only event.

Virtual events company InXpo announced today that it will partner with UBM Studios to bring Comdex back as one of more than 100 virtual trade shows it has planned for this year. Comdex, originally the Computer Dealer Expo, was held in Las Vegas every fall as an extravaganza for the tech world until it died in the dotcom bust in 2003. Now the Consumer Electronics Show has superseded the old trade show as the biggest live tech showcase. The Comdex Virtual show will take place Nov. 16 – 17.

The virtual trade show industry is expected to grow 56 percent a year, according to Market Research Media. One big adopter is Cisco, the networking giant that used a virtual show to replace its annual sales event. 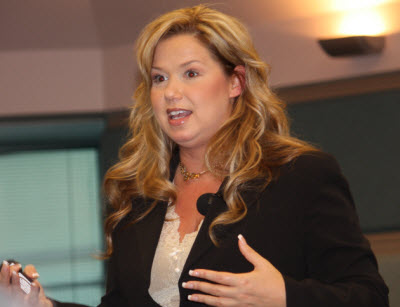 Angie Smith, who manages global sales events, spoke at the recent VirtualEdge live trade show about virtual events. She said that she was initially depressed when Cisco canceled meeting travel budgets in November, 2008 in an effort to save $20 million in air travel.

But the company forged ahead with a virtual event in August, 2009, where  it pulled out the stops using InXpo’s platform and the George P. Johnson experience marketing firm. It got 19,000 registrants from 24 time zones to log into the virtual conference over four days. They were treated to 88 hours of video and an alternate reality game, which was a James Bond-like adventure/scavenger hunt created by No Minds. The game spurred some serious competition among the sales force because the prize was some quality time with Cisco chief executive John Chambers.

Full told, about 93 percent of the registered users attended and spent 450,000 hours in the event, or a total of 3 hours and 37 minutes per attendee. There were 11,394 views of the conference leaderboard and 300 million points scored from the various games. About 8,239 people participated  in group chats.

The result was a 90 percent reduction in costs compared to the real-world event. The average cost of the in-person events was $4,400 per person, compared to just $386 per person for the virtual event. There were 4,800 WebEx sessions. And the event resulted in 334,000 hours saved in reduced travel time, 211 million air miles saved, and a big savings in carbon emissions: 84,400 tons. The salespeople preferred in-person networking hands-down. But the virtual event generated good feedback. Cisco is going to hold a virtual sales meeting again this year.

InXpo is expanding its use of games to motivate people in the virtual events. The company is including several generic games, such as trivia and golf games, that can be tailored to a conference. NCR used the games in a virtual event and found that they worked well. 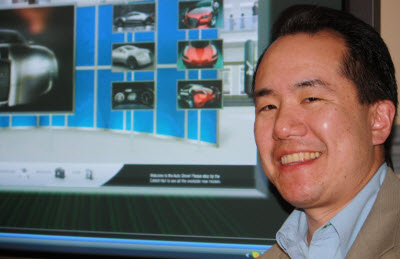 Dennis Shiao, product marketing manager at InXpo, said the company is doing more hybrid events, which are trade shows with both physical and virtual venues. There can be some interaction, such as online users controlling a live webcam that they can point at different parts of a booth in the real trade show.

“With these events, you can reach a more global audience,” he said.

Meanwhile, another virtual event company, Unisfair, announced recently that its users can create their own virtual events using its platform in just one hour. Joerg Rathernberg, senior director of marketing, showed me how to do just that at the VirtualEdge show using version 9 of the company’s engagement platform.

Unisfair has renamed the platform because it wants to engage users for a longer period of time than just one event. The company has started a Unisfair Virtual Business Center that serves as a platform for events as well as ongoing communication with users. Within the web-based business center, a customer can plan and link any number of virtual events that happen throughout the year. IBM plans to use the platform for 70 upcoming lead-generation events. Other clients include Ariba and Creative Artists Agency. 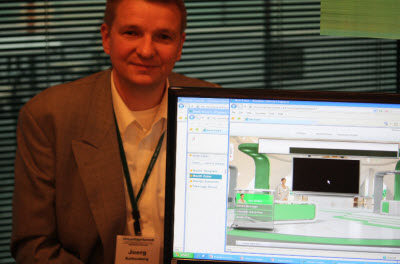 “Now your venue stays the same, even if the event is completed,” Rathenberg said. “It’s been frustrating in the past for the vendors, who have to rebuild events, and for the users, who had to keep creating new avatars.”

Now users can create a profile and avatar just once and use them over and over. IBM is already using the Virtual Business Center, which goes live on Monday. In the past, customers used to freeze their event features three weeks before the event. Now they can change things on the fly. Twitter and Facebook are integrated into it for real-time communication. And that platform, with a feature called Unisfair Smart Reporting, can generate reports on the degree of user engagement. Those reports can be tailored and filtered so that they send only qualified leads to salespeople, rather than inundating them with useless material from casual attendees.