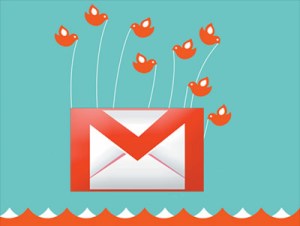 If you live in the United States, chances are, you were asleep. But for those in other parts of the world, and those of us who are nocturnal, Google’s email service, Gmail, was down for several hours on Tuesday morning.

While this isn’t anything new, Gmail crashed a few times last year, it is the first time it has gone down since offline support was added. That fact actually caused quite a few people not to realize there was even an issue — until they tried to send a message. Another curiosity is that even while Gmail the web service was down, Gmail’s IMAP service was working to send and receive mail from email clients and devices such as the iPhone.

Almost everyone I follow on Twitter seems to use Gmail. At all points during the outage, almost my entire stream was consumed with tweets about Gmail being down. And Twitter Search, perhaps the ultimate search engine for what people are complaining about in real time, not only had the term “Gmail” as a trending topic of discussions within minutes of Gmail failing, but it also saw “IMAP” and “Gfail” rise into the top terms as well.

Gmail appears to be working again in the United States now, albeit slowly, at 3:15AM Pacific time. Reports on Twitter indicate that it is still down in other parts of the world. Google is silent on the issue right now, but you can be sure it will weigh in tomorrow. As more and more people move their daily online activities to the cloud, companies like Google need to prove it can be a reliable replacement to desktop email. Features such as offline access make the easier, and it appears to have passed its first test tonight as even with the downtime, people could still at least access recent emails.

Of course, some of us don’t yet use offline access. So instead I complained about Gfail no less than six times in one hour on Twitter. I think it helped.

Update 4:30AM PST: It appears that much of the U.S. has service restored (though there are still some reports of outages). Meanwhile, the fix appears to be traveling through Europe and into Asia now. Google has posted on its blog as well:

We’re working very hard to solve the problem and we’re really sorry for the inconvenience. Those users in the US and UK who have enabled Gmail offline through Gmail Labs should be able to access their inbox, although they won’t be able to send or receive emails. 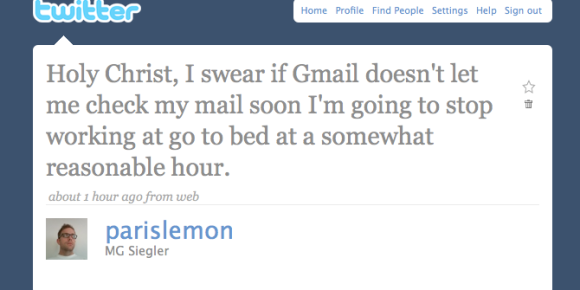