WhitePages, which has quietly grown into the largest database for contact information for Americans, has revamped its web site, and cleaned it up — most notably to avoid what we earlier criticized as scam-like tactics.

The move is significant because WhitePages is emerging as a significant player — an easy place to go to if you want to find information about 200 million Americans, from address, to phone number, and increasingly email and cell phone numbers. You can find address and phone information directly by going to the site — something that other sites such as LinkedIn don’t offer as easily. At LinkedIn, for example, you have to be “connected” with an individual before you get their contact info. This direct, quick information is especially useful now that most people want it on their mobile phones while on the go.

WhitePages has spent $2.5 million to overhaul its site design, make it faster, simplify advertising and even change its logo. It announced the changes this morning, but we had a chance to talk to chief executive Alex Algard earlier about the changes. While I was critical of WhitePages in my last piece, I’m now convinced the company is genuine in wanting to provide good information and avoid some of the shady practices conducted by others in the industry.

The most commendable change is that advertising has been made clearer. There are only two or three ads per page. More importantly, WhitePages has stopped an earlier practice of promising you more information on people, only to whisk you off to a different site and throw you into a cat-and-mouse, scam-like game that encouraged you to sign up for a monthly fee for services you didn’t really want. Instead, the service now makes it much more obvious when it is sending you to a different site (see image below, where you can see there are now multiple references saying you are being taken to a sponsored site). WhitePages also only offers information from other vendors approved by the Better Business Bureau with a “B” rating or better, Algard said.

The goal of the site cleanup was to keep the results “revenue neutral” — in other words, not make less money even though it was cutting the number of ads — Algard said. However early signs suggest that revenues have actually increased since the site redesign, he said. The redesign was launched a few weeks ago but is only now being announced. Algard said the improvement comes from better performance on the remaining ads and from a new ad woven into the middle of the search results.

The site’s changes also include a move to a different front-end architecture based on Ruby on Rails, which has made the average page view load time 51 times faster than old web site, Algard said.

The site focuses on helping users “connect” with others and wants to make sure it honors peoples’ privacy, Algard said. As a result, it lets people opt-in to provide their private email and cellphone contact information, but allows them to keep this information private if they want to. To encourage people to offer up this information voluntarily, WhitePages offers to make an exchange: It will provide you with exclusive information it has on people that other Web site databases don’t have — for example information about who else lives in a person’s household, including their age. WhitePages has gotten cellphone and email information from 1 million users. By the end of the year, it will have gotten such information from 3 million people — so the rate is accelerating, Algard says.

WhitePages has more contact and household information about people than any other searchable database, Algard said. It has 200 million distinct American people in its database, compared to Facebook’s 65 million, for example, and LinkedIn’s 50 million or so. WhitePages has grown significantly over the past 18 months, more than doubling from 90 million people. It did so by culling information from more than a dozen sources, such as professional work listings, and other marketing databases it has licensed access to, he said.

The site lets you “claim” your listing, edit it so that it’s accurate, and keep certain information private (such as emails and cell numbers) unless it is already public, for example, phone numbers and street address. Algard also said that WhitePages is staying away from collecting biographical information, such as information about divorces, criminal prosecutions, bankruptcies, house purchase and price information, and so on.

The company says it powers more than 2 billion searches on over 1,300 partner sites including Verizon, AOL, United States Postal Service, and MSN 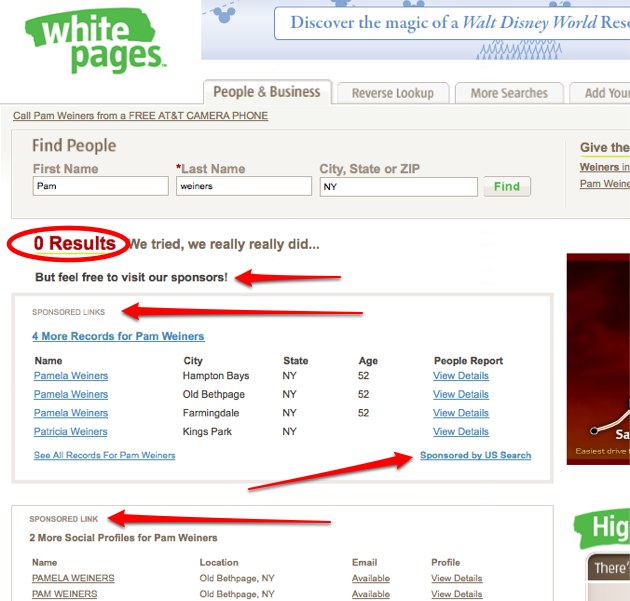