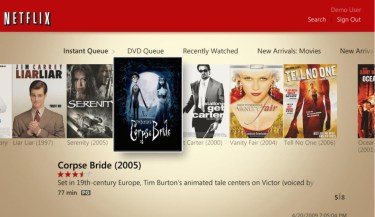 Microsoft is announcing today that its Windows Media Center can now show more than 12,000 movies and TV shows from Netflix’s library of online video rentals.

The videos are now available to watch instantly for users of the Windows Vista Home or Ultimate operating systems, as every copy of those operating systems has Windows Media Center software. The move follows a deal between the two companies to make Netflix movies available on the Xbox 360 back in November.

That move was trumpeted as a big deal because it finally gave the Xbox 360 a significant new entertainment offering beyond video games. I’m not sure whether Netflix on Windows Media Center will be as big a deal, particularly since you can already go to Netflix’s own site to instantly watch the same movies today. The appeal of this deal is really about making Netflix on the PC more convenient, since you can watch this using a remote control from a couch, whereas Netflix on an ordinary PC monitor is usually a step down from watching a movie on your PC.

Microsoft said the deal will offer a better experience for its consumers, who previously had to jump from web site to web site to find the movies they wanted to see. On the other hand, Netflix’s selection of “watch instantly” videos often doesn’t include the newest movies available on DVD. You need to have a Netflix subscription in order to be able to view movies from its selection.

Computers with Windows Media Center can be fairly easily hooked up to a computer and then operated with a TV-like remote control. Not everyone uses it, though, because it still takes a little computer savvy to set it up.

Users can now click upon the TV+Movies menu and then click upon the new Netflix menu on the computer to start watching movies. Users can also manage their own custom Netflix movie queues and search through the entire Netflix library via remote. Suggested movies, based on Netflix’s analysis of your movie-watching habits, also show up and can be browsed via the Windows Media Center remote.

The addition of Netflix follows the recent addition of the Sports Channel, which integrates sports shows from CBS, Fox, MSNBC and other sources into a Windows Media Center channel.