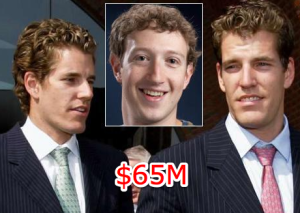 Tyler and Cameron Winklevoss may have had some serious evidence showing that Facebook founder Mark Zuckerberg stole ideas like “profile pages” back when he worked at their social-networking startup, ConnectU. Facebook recently paid the brothers (and presumably other ConnectU stockholders) a cool $65 million to settle long-running lawsuits they brought against him after he left their company to start his rival site.

The news leaked out through a brochure made by business litigation law firm Quinn Emanuel to advertise its money-winning ability. Here’s what we know, per a law publication called The Recorder (Facebook tells me “we can’t comment on a confidential agreement”).

Facebook paid the founders of ConnectU $65 million to settle lawsuits accusing Facebook CEO Mark Zuckerberg of stealing the idea for the wildly successful social-networking Web site, according to a law firm’s marketing brochure. Lawyers in the heavyweight fight had expended great effort to keep the settlement secret, but ConnectU’s former lawyers from Quinn Emanuel Urquhart Oliver & Hedges published the amount in a firm advertisement trumpeting the firm’s prowess. The disclosure was apparently inadvertent.

Anyway, as I’ve said before, it’s hard for me to see what exactly the Winklevoss’ could have really been holding over Zuckerberg’s head. It’s not like they are social media pioneers who brought ideas like news feeds or a social network developer platform to the masses. Perhaps they have some paperwork he signed giving them any future social-networking intellectual property he might create? Perhaps proof of actual code that Zuckerberg wrote for ConnectU, then ported to Facebook — but this is PHP code, not exactly hard-to-write stuff. In any case, as they say, success has a thousand fathers; other people who knew Zuckerberg in the early days also claim to have been ripped off by him. Maybe Facebook was just tired of the Winklevoss’s expensive and aggressive lawyers hounding them and getting reporters to write sensational headlines.

Perhaps its poetic justice that this news is leaking out via the Winklevoss’s law firm. The settlement likely had binding confidentiality terms that will expose the plaintiff to sanctions — it’s the sort of thing that can even get lawyers disbarred, a lawyer friend who spotted the news tells me.

[Winklevoss-Zuckerberg composite via The Age.]